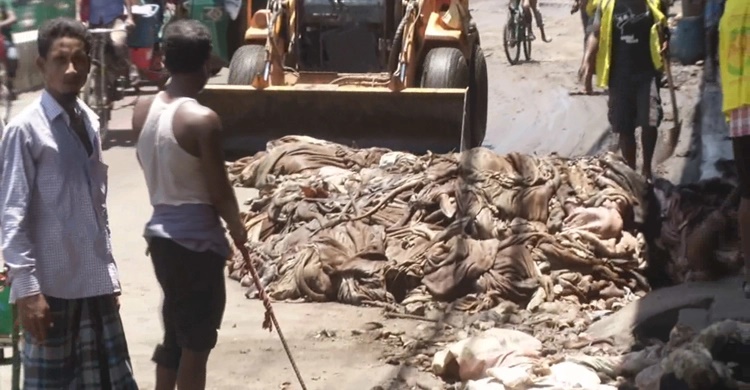 Councillor Shoibal Das, said, “We have dumped over 15,000 rawhides of sacrificial animals into garbage depot till Sunday night.”

The seasonal traders collected rawhide from different parts of the districts and took them to the port city but they failed to sell them for lack of demand and left those on roads.

In many places, the seasonal traders have buried the rawhide under the ground failing to sell those to the merchants.

Getting bad odor, the city corporation authorities have thrown away the rawhide of sacrificial animals.

Moslem Uddin, President of Greater Chattogram Rawhide Wholesale Association, said, “Some 5 to 5.5 lakhs of rawhide brought into the city every year and this year 4 lakh rawhide was brought , though some skins of sacrificial animals from upazilas have been damaged which is less than of the previous year.”

There were 22 tanneries in the port city but now the number of tanneries is only one in the city as the Department of Environment (DoE) has forced the other tanneries to close down for not complying with the rules of DoE.

Moshedul Alam, deputy chief cleaning officer of CCC, blamed the negligence of the wholesale trader behind the damage of rawhide.

Besides, 5,000 rawhides were found rotten on the Sunnia Ahmmadia Madrasa ground in the city.

This year, the government fixed the price of raw cowhide ahead of the Eid-ul-Azha at Tk 35-40 per square foot in the capital and Tk 28-32 outside Dhaka.

Meanwhile, the prices of goatskins were fixed at Tk 13-15 per square foot across the country while that of she-goat at Tk 10-12, said Commerce Minister Tipu Munshi at an online briefing,  held on July 26.