No new deaths, but over 5.4 million facing adverse effects of flood 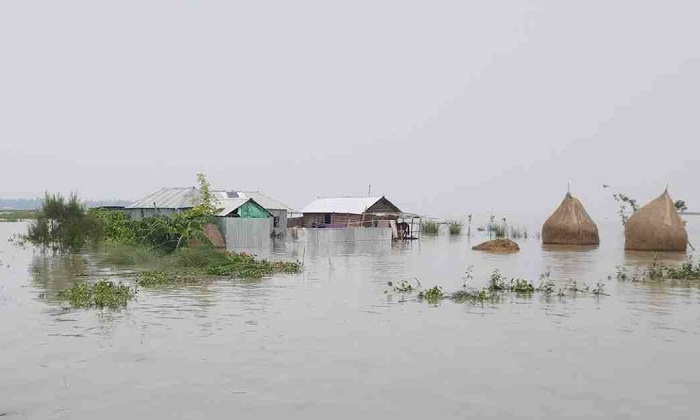 Around 11.14 lakh families have been affected and remain waterlogged, while 135 lives have so far been lost in the country’s current bout of flooding that set in during the last week of June.

A daily bulletin of the Directorate General of Health Services (DGHS) confirmed Sunday that the death toll from the ongoing flood - already the longest-lasting since 1998 -remained at 135, with no new deaths (due to flood) recorded in the preceding 24 hours.

Besides, the Disaster Management and Relief Ministry in a press release said that around 11.14 lakh families have been marooned and an estimated 54,40,331 (5.44 million) have been adversely affected by flood hazards in 33 districts.

Among the deceased, 29 died in Jamalpur, 22 in Kurigram, 20 in Tangail and 12 in Gaibandha and Lalmonirhat, 11 in Sirajganj, 10 in Manikganj, 5 in Netrakona, 3 in Rangpur, two in Gopalganj, Naogaon, Sunamganj, Nilphamari, one in Rajbari, Shariatpur, Munshiganj, according to DGHS.

A total of 159 upazilas across the country have been affected in the flood that set in during the last week of June, and is yet to subside fully.

People in Kurigram, Gaibandha, Sunamganj, Sirajganj, Tangail, Faridpur and Naogaon were the worst sufferers from the deluge.

Besides, the Disaster Management and Relief Ministry has allocated a total of 14,410 metric tonnes of rice for flood affected people and so far distributed 9,221 tonnes among them in 33 districts.

According to Deputy Commissions reports from flood affected districts around Tk 2.29 cr has been distributed among the allocated Tk 3.44 cr until August 1.