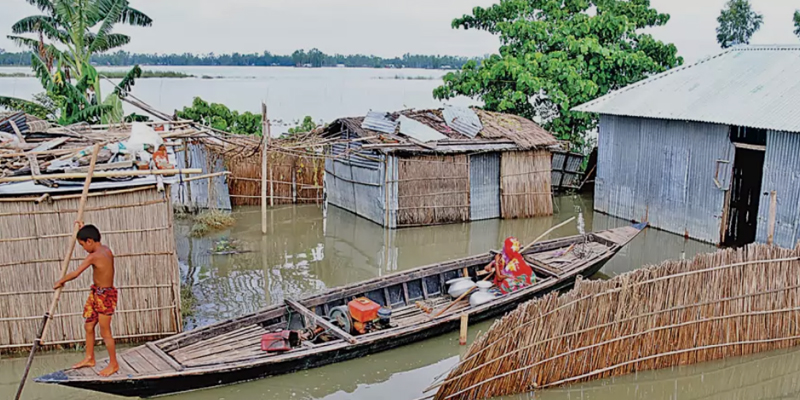 Flood situation has been improving in the region for the last few days as water recession continues in many rivers in the Ganges basin for the fourth consecutive day on Sunday.

Of the total 30 river points, being monitored in Ganges basin regularly, water levels decreased at 24 stations, while went up at five points and remained stable at one point at 9 am today, creating a further hope of reducing the plight of the flood-affected people in the char (shoal) and other low-lying areas.

The rivers were flowing below the danger level at 25 points, while above danger mark at five points this morning.

Local office of Bangladesh Water Development Board (BWDB) has recorded a continuous falling trend of water at the points of Pankha, Rajshahi, Hardinge Bridge and Talbaria in the past 24 hours ending 9 am today, Mukhlesur Rahman, Superintending Engineer of BWDB, told BSS.

Water levels of the Ganges River further decreased by four centimeter (CM) at Pankha in Chapainawabganj, six cm each at Rajshahi and Hardinge Bridge and three cm at Talbaria points while the water level in the Padma River decreased by three cm at Goalunda point.

On the other hand, the water level of the Korotoa River and the Jamuna River under the Brahmaputra Basin which flow through Bogura and Sirajganj districts were seen a rising trend again this morning, forecasting deterioration in the flood situation in the two districts.

Arifuzzaman Bhuiyan, executive engineer of Flood Forecasting and Warning Centre (FFWC), said the water level in the Korotoa River increased by 19 cm afresh at Chak Rahimpur, while decreased by two cm at Bogura point. However, the river was flowing 26 cm and 168 cm below the danger mark at the two stations respectively this morning.

He also said the water level in the Gur River increased by one cm at Shingra point in Natore district and the river was flowing 76 cm above the danger mark.

The Atrai River was flowing 81 cm above the danger level at Baghabari point in Sirajganj district with a four cm fall afresh this morning.

Water level in the Mohananda River further receded by one cm at Chapainawabganj district and the river was flowing 97 cm below the danger mark.

Of the 15 river points both in Ganges and Brahmaputra Basins, monitored in almost all eight districts under Rajshahi division, water levels decreased at nine points, went up at five points and remained stable at one point.

The rivers were flowing below the danger level at 10 points, while above danger mark at five points this morning.

Meanwhile, the civil administration has, so far, recorded that around seven lakh people were affected by flood and standing crops on 27,773 hectares of land were submerged in Rajshahi, Natore, Naogaon, Sirajgonj and Bogura districts.

Taka 24.26 lakh in cash, 1,235.68 metric tons of rice, 5.97 lakh packets of dry-food and Taka six lakh for baby food are being distributed among the marooned people in the worst-hit areas at present.

Besides, Taka six lakh for cattle feed is also being distributed in Sirajganj, Bogura and Naogaon districts.

He said the government has also allocated more 1,524.32 tonnes of rice, Taka 31.28 lakh in cash, Taka 6 lakh for baby food, 2.13 lakh packets of dry foods and Taka 11 lakh for cattle feed for distribution among the affected people in all the eight districts in the division.

The Department of Health has undertaken all possible measures to prevent any outbreak of water-borne diseases among the marooned people in the flood-affected areas amid the novel coronavirus (Covid-19) pandemic.

Divisional Director of Health Dr Gopendra Nath Acharya told BSS that 658 medical teams are working in 101 flood affected unions under 18 upazilas in the division. Besides, 18 flood shelters were opened in Bogura district.

He added that 50 unions in Sirajganj, 19 in Pabna, 17 in Bogura, 10 in Naogaon and five in Natore districts are the worst affected ones.

He said they have recorded 1,893 patients suffering from various other flood-related diseases, including 60 diarrheal and nine respiratory tract infections since July 1.