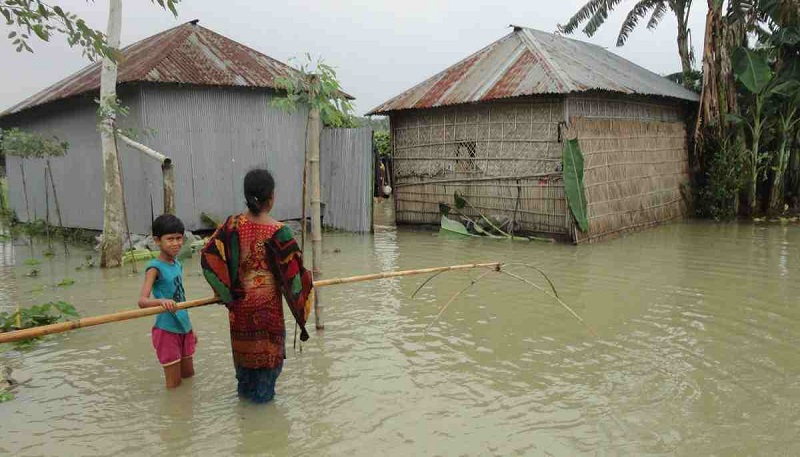 The flood situation remained mostly stable despite a little rising trend of the water levels in major rivers continued during the last 24 hours ending at 9 am on Sunday in eight flood-hit northern districts under Brahmaputra basin.

Bangladesh Water Development Board (BWDB) Officials said the flood situation might remain steady during the next 24 hours amid no notable monsoon rains in the upstream with a possibility of an improving trend in the next 48 to 72 hours in the basin.

According to BWDB’s Flood Forecasting and Warning Centre (FFWC) flood situation bulletin, no monsoon rains were recorded in the upper Brahmaputra basin except only 31.20 mm at Shillong point in the upstream during the last 24 hours till 9 am today.

Water levels of the Dharla marked fall by 1cm at Kurigram while Ghaghot rose by 2cm at Gaibandha and Brahmaputra marked little rise by 1cm at Noonkhawa and 2cm at Chilmari points in Kurigram district during the period.

Besides, water levels of the Jamuna marked rise by 10cm at Fulchhari, 3cm at Bahadurabad, 8cm at Sariakandi, 5cm at Kazipur and 4cm at Sirajganj points while Teesta rose by 4cm at Dalia and fell by 4cm at Kawnia points during the same time.

“The overall flood situation may remain steady in Kurigram, Gaibandha, Bogura, Jamalpur and Sirajganj districts in the next 24 hours under the Brahmaputra basin,” the FFWC bulletin added.

BWDB officials said the major rivers were still flowing above the danger mark at nine points of Kurigram, Gaibandha, Jamalpur, Bogura and Sirajganj districts at 9am today.

“Meanwhile, the Teesta was flowing below its danger marks by 6cm at Dalia and 24cm at Kawnia points at 9am today,” Executive Engineer of the Rangpur Division of BWDB Md. Mehedi Hasan told BSS this afternoon.

Talking to BSS today, Chief Engineer for Rangpur Zone of BWDB Engineer Jyoti Prosad Ghosh said there is no report of breaching of flood control embankments and structures anywhere in all eight districts of Rangpur division under the zone.

“We are closely monitoring the flood situation and safety of flood control structures since the beginning of the current monsoon season,” Ghosh said, adding that riverbank protection works are continuing at several vulnerable points under the zone.

Executive Engineers Ariful Islam for Kurigram and Lalmonirhat Divisions of BWDB and Mokhlesur Rahman for its Gaibandha Division said protections works of riverbanks at several vulnerable points alongside major rivers were continuing in these districts.

Additional Director of the Department of Agricultural Extension for Rangpur region Muhammad Ali said floodwaters inundated standing crops 12,294 hectares of land with possibility of more crop damages due to prolonged submergence in the region.