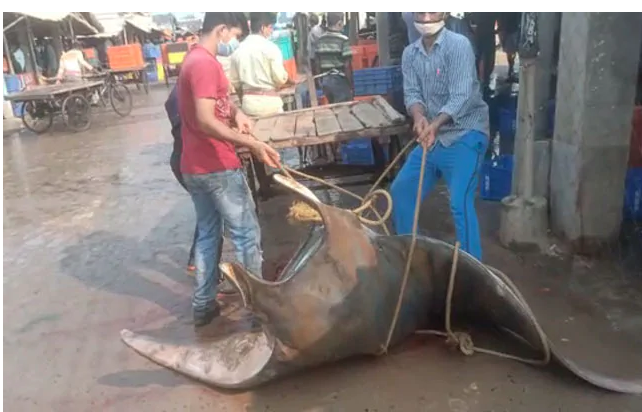 An enormous fish weighing reportedly around 780kg was caught by a group of fishermen off Bengal's Digha coast this morning. The fish which locals call Shankar fish resembles the ear of an elephant. It was 8 feet long and 5 feet wide. The huge fish was sold for Rs 50,000 to a fish trading firm in Digha of India.

The fish was caught 8 km off the Udaypur beach in Odisha near Digha. Fishermen in the coastal town say this is the heaviest fish they have ever caught.

A fish is most likely a giant Manta Ray from the Ray family of fishes given the location where it was caught. Shankar fish is a generic name for all Ray fishes in parts of East India.

Massive crowds gathered to see the huge fish after it was caught; videos have been shared widely on social media, the authenticity of which is yet to be verified. Even tourists gathered to see the fish when it was brought in the local markets. Shankar fish is eaten widely in Bengal.

A giant Manta Ray weighing around 300 kg was caught by fishermen off the Digha coast in March this year.