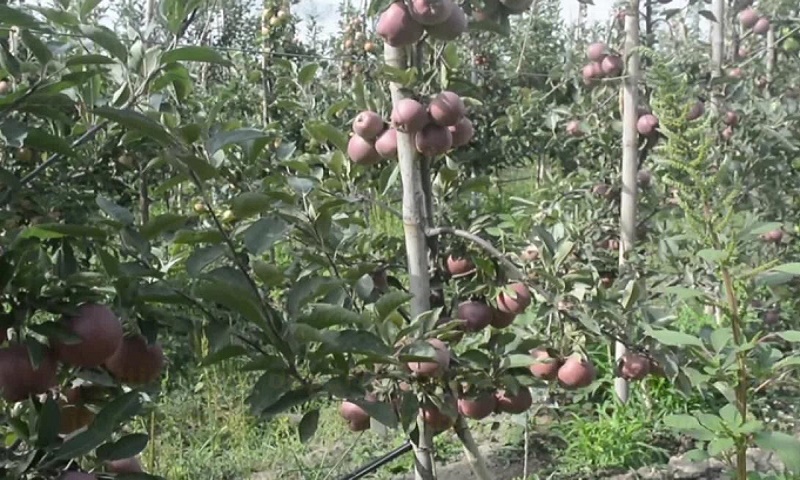 The Prime Minister's Development Package (PMDP), announced by Prime Minister Narendra Modi in 2015 for Jammu and Kashmir, has proved to be a breather for the farmers in the Union Territory as the horticulture department has set up apple orchards in Anantnag district to help increase the apple production.

The department has lent a helping hand to an apple grower by giving him high-density apple plants under the PMDP which provides them nets, borewells and other facilities on subsidy.

These high-density plants yield good results within two years of planting as compared to the traditional plants that give limited apple production even after ten years occupying large space.

Under the scheme, the government promotes high-density plantations, phasing out old plantations which have completed their economic life, giving farmers a subsidy of 50 per cent on re-plantation.

The horticulture department also provides technical support to apple growers for the scientific layout of these new plantations.

Speaking to ANI, Asif Hussain Bodha, Horticulture Officer, Anantnag, said that these high- density plants have been given to the apple growers under PMDP scheme and they are earning a good amount of money.

"We have set up an apple orchard here. This land was barren. The other day, I was passing by this area when Shakeel Ahmad (an apple grower) met me. I told him about the project, he too was interested, so we established this orchard here. Traditional farming yields only 11-12 MT per hectare while we aim towards 30 MT per hectare with the help of this project. I think we are moving towards achieving this goal," Bodha said.

"This scheme falls under PMDP in which we have given 90 per cent subsidy in plant material and after that, the department has given him tractor and a borewell on subsidy. This project helps earn a good amount of income," he added.

"I planted apples in June 2018 and had good productivity in August last year. I just want to say that more people should come forward to join the project which will help grow our apple farming industry," he said.

Another apple grower, Mushtaq Ahmad, who has also adopted the same method for apple plantation, said it is very profitable.

"This increases our income as we get 90 per cent subsidy," he told ANI.