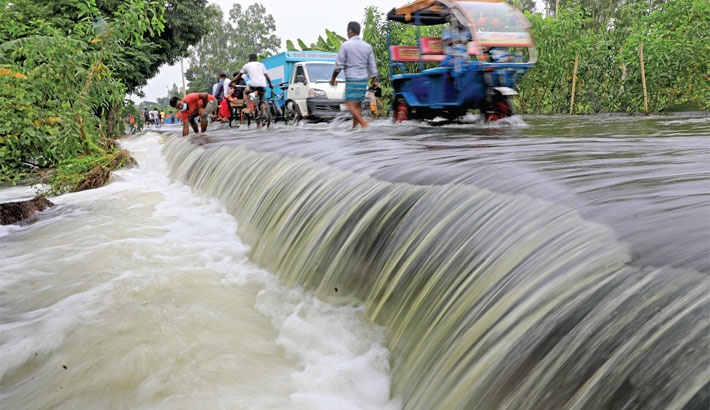 The flood-hit people of 31 districts in the country are leading a very miserable life as the deluge has damaged their cropland and washed away houses, cattle and other valuables.

Over 4.7 million people of 908 unions under 153 upazilas in 31 districts have been seriously affected by the devastating flood that has been continuing for the last one month.

Sufferings of the flood-hit people in these areas know no bounds due to lack of food and pure drinking water, locals said adding that government relief is too meagre to meet their demand.

Many flood victims have started selling their cattle and other valuables to somehow manage their daily meals as they have lost everything in the flooding, they said.

“We are being compelled to sell our cattle for survival. It is not possible for us to spend on cattle rearing in such a situation,” a flood-hit farmer Baten told the daily sun.

“Prices of cattle have fallen in the flood-hit areas and so we are forced to sell our cattle at throw-away prices,” he added.

“The flooding in the districts may continue till the first week of August,” he added.

West Bengal, Asam and Meghalaya of India  may witness heavy rain in the next 48 to 72 hours that may further worsen the flooding in Bangladesh, according to FFWC.

“Water level of the rivers around Dhaka city may continue to rise. The Lakhya river may continue to swell in Narayanganj. As a result, the flood situation in the low-lying areas of the district persist for the next seven days.”

“Water level of the Balu river at Demra, the Turag at Mirpur, the Dhaleshwari at Rekabi Bazar may rise further. This may result in flooding of low-lying areas in Dhaka in the next seven days,” the FFWC official said. Ganges-Padma River may steadily rise. Water level at Goalondo station in Rajbari, Bhagyakul station in Munshiganj and Sureshwar station in Shariatpur district may continue to rise.

Road communications in the flood-affected districts are in a bad shape as many embankments and culverts have been damaged by the ongoing flooding.

The government has geared up relief distribution among the flood victims in the affected areas. Water level of the country’s major rivers was rising at 37 out of 101 points on Monday morning, a FFWC bulletin said.

Seventeen major rivers were flowing above danger marks at 30 stations on Monday, it added.