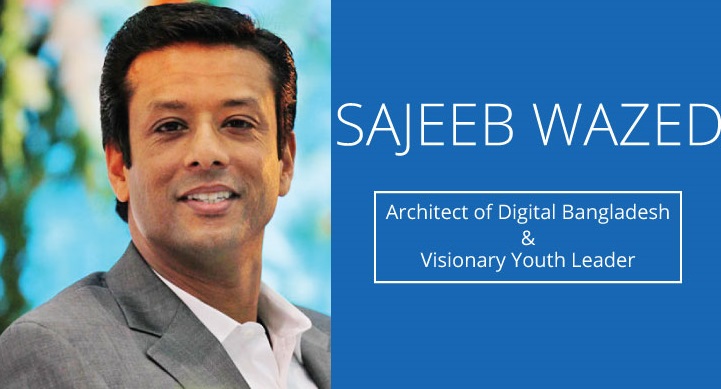 Mr. SajeebWazed Joy is an information and communication technology expert and a political figure.  He is the son of honourable Prime Minister Sheikh Hasina of the Government of the People's Republic of Bangladesh and the eldest grandson of Bangabandhu Sheikh Mujibur Rahman, the first President of Bangladesh and the father of the Bengali nation for thousands of years.  He played a key role in the formulation of the Bangladesh Awami League's "Vision 2021" manifesto.  He is currently serving as the Information and Communication Technology Adviser to the honourable Prime Minister. Mr. Sajeeb Wazed Joy holds a Bachelor of Science degree in Computer Engineering from the University of Texas at Arlington, USA.  He then earned a master's degree in public administration from the Kennedy School of Government at Harvard University.

He played a major role in bringing the Awami League to power in 2008.  Especially in the election manifesto, the idea of ​​Digital Bangladesh was included under his initiative.  Joy was elected Global Leader of the World in 2008 by the World Economic Forum. Sajib Wazed Joy married Christine Overmeyer on October 26, 2002.  They have a daughter. Although he was interested in politics while studying, Joy entered active politics in 2010.  On 25 February of that year, he was given the post of primary member of the Rangpur District Awami League, through which he officially entered politics. In 2008, the election manifesto released by the Awami League in December of this year, there was a sentence in the information technology section along with many other things, 'Digital Bangladesh by 2021.'  According to them, the metaphor is determined in that sentence.  Sajeeb Wazed Joy, IT Adviser to the Prime Minister, is leading the way to implement that vision.

In the last tenure of the present government, Bangladesh has come a long way on the path of digitisation. Many of the tasks performed in the country are not done manually now.  From the Secretariat to the Union Parishad and even to a school in a remote area of ​​the village, the touch of digital Bangladesh has reached. Sajeeb Wazed Joy is taking the country's ICT sector forward with his own hands.  It would not have been possible to go so far without his dynamic leadership, guidelines and direct supervision.  When it comes to information technology, he started doing it. When Sheikh Hasina came to power for the first time in 1996, Joy's own experience in technology encouraged Bangladesh to move on the road to the digital world.

Since then he has been advising Sheikh Hasina.  As a result, after becoming the Prime Minister for the first time, Sheikh Hasina undertook a programme to make the administration of the government dynamic through the use of information technology, to introduce computers in the development of IT sector and to continuously inspire school-college-university students in technology. "I learned to operate a computer from Joy," she said.  For this, he is my teacher. Not only that, through the overall development of information technology, the awakening of the poor working people of Bangladesh to achieve self-sufficiency among people of all walks of life has come from the mantra of victory.  I am proud to be the mother of such a child.”

Junaid Ahmed Palak served as the State Minister for ICT very closely with Sajeeb Wazed Joy.  In the eyes of this young political activist, Sajib Wazed Joy is a 'visionary leader'.  Palak said he could see the future 5-10 years ago and plan accordingly.  The ICT policy was formulated in 2009 on his advice.  But then he told them what needs to be done to implement this policy and build a digital Bangladesh.  Action plans, time frames, mission-visions, roadmaps make these clear to us.

By working accordingly, but in just 13 years, Digital Bangladesh has become real.  He showed us how to adapt to a changing world.  Under his leadership, we are now moving from a labour-dependent economy to a technology-dependent economy. According to the ICT Ministry, the Union Digital Centre was set up in 2010 at the union level.  In 2014, the district level was brought under the internet facility with high speed fibre optic cable.  It started expanding at the upazila level from 2015.  About three thousand unions currently have fibre optic connections.  The target is to deliver optical fibre to all the unions of the country, i.e. about four and a half thousand unions by 2021.

Apart from infrastructural development, Sajib Wazed Joy is also working on a plan to develop ICT and technology in the education sector.  Sheikh Russell Digital Lab has been set up in about eight thousand educational institutions of the country.  The government aims to bring all organisations under this technology.  The process of including ICT subjects in the primary curriculum to introduce students to ICT from an early age is underway.  The Business Incubation Centre is also being set up to increase job opportunities for university graduates in the business market.  Two such centres have already been set up at BUET and CUET. Even he is being appreciated for his dealings all over the world.

Sajeeb Wazed Joy, Adviser to the Prime Minister on Information and Technology, received the ICT for Development Award.  He was nominated for the award in recognition of his contribution to the digital world.  The award was handed over to him by renowned Hollywood actor Robert Davy on Monday, September 19, 2018. Leading personalities from different countries, including the Prime Minister of Bangladesh Sheikh Hasina, high-ranking officials of the United Nations and famous actors and musicians were present on the occasion. According to the website of Bangladesh Awami League, he has been nominated for this award for helping the citizens of Bangladesh by adopting the 'Digital Bangladesh' project. Two lakh 80 thousand young people are being given free computer training.

The digital Bangladesh of Sajeeb Wazed Joy, a 36-year-old IT expert in 2007, has impressed the head of the Indian government today, which is why he announced the launch of Digital India on July 1, 2015. Sajeeb Wazed Joy was also the first to introduce biometric (fingerprint) mobile phone SIM registration to protect the country's customers.  He has set 5 mega of broadband (high speed).  He had done 1 megabyte before.  He has also started the process of handing over free laptops to the poor meritorious students.  He also plans to give everyone a tab to speed up the work of government officials.  Distribution of tabs has already started.

Bangabandhu's grandson Sajeeb Wazed Joy dreamed of the young generation of the country.  He said to the youth that they would take the information technology of this country forward.  He has also arranged various IT training for the youth to become proficient. Again, the Government of the People's Republic of Bangladesh established the Bangladesh Hi-Tech Park Authority in 2010 with the aim of achieving socio-economic prosperity through massive employment in the IT / ITS sector. The IT Park will contribute to the employment of about three lakh people.  Bangladesh Hi-Tech Park Authority has taken initiative to set up Hi-Tech Parks in every department and district of the country for the development of IT sector and creation of new jobs. Bangladesh has recently been connected to the International Terrestrial Cable.  As a result, customers are able to enjoy uninterrupted internet facility.  Of these, 58 districts have come under fibre optic connection.  The price of bandwidth is also being reduced keeping it within the purchasing power of the common man.  It is not possible to achieve sustainable socio-economic development by lagging behind in technology.  Therefore, the present government had set a target of building 'Digital Bangladesh' by 2021 in its election manifesto.

In the last seven and a half years, the application of information technology has been ensured in all economic activities, including banking, service delivery, education, health, agriculture.  People of all ages have embraced this technology.  Internet service and information service centres are running in every union.  From these 4 million rural people are getting e-services every month.  Internet speeds have been increased and costs have been reduced.  The number of internet subscribers has increased seven times to nearly four crore.  15 crore mobile SIMs are being used in Bangladesh. The digital Bangladesh of Sajeeb Wazed Joy has impressed the head of the Indian government today; which is why he announced the launch of Digital India on July 1, 2015. July 27 is the birth date of this humble, soft-spoken and intelligent man who loves to play the guitar, to do photography.  He never tried to seize power.  When he was repeatedly asked for the post of Central Council in the 20th Council of the Awami League, he refused, saying that he did not stay in the country for a long time of the year and could not do justice to the post.

The writer is a student, Department of English, University Of Dhaka