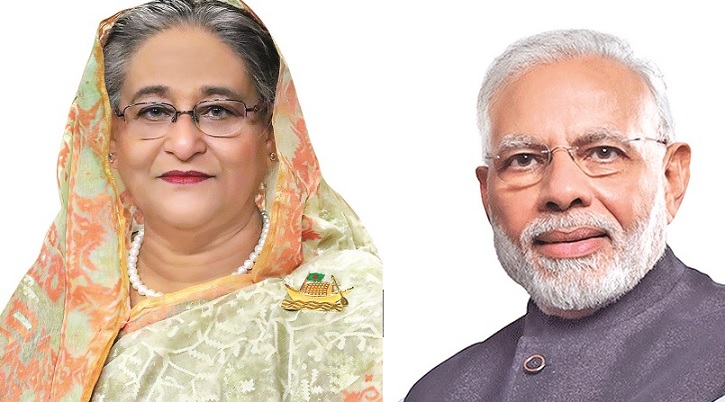 The bilateral relations between Bangladesh and India have reached new heights through resolving longstanding disputed issues and increasing trade and people-to-people contact under the dynamic leadership of Prime Minister Sheikh Hasina and Prime Minister Narendra Modi.

Diplomatic sources say the bilateral relations between the two neighbours have risen to their historical best though some pending issues, including the much-talked-about Teesta water sharing, are yet to be resolved.

Bangladesh and India signed the historic Land Boundary Agreement to end the 41-year-drought of statelessness to the residents of enclaves.

The then prime ministers of both the countries signed the Land Boundary Agreement in 1974 to exchange enclaves and simplify their international border.

But, the deal was finally inked under the leadership of Sheikh Hasina and Narendra Modi, who also came to power in 2014 and visited Bangladesh in June 2015.

Another longstanding dispute over the maritime boundary between the next-door nations was also resolved after a Hague-based international court awarded Bangladesh 19,467 square kilometres out of 25,602sqkm disputed area in the Bay of Bengal in 2014.

The sources also say both the countries enjoy win-win trade facilities as Bangladesh earns over one billion dollars by exporting goods.

Bangladesh also allows India a dedicated economic zone, paving the way for many Indian giants to invest in the country.

Besides this, top business conglomerates of Bangladesh and India have also set up industries in their countries in the last one decade.

The sources further say they are not bothered about Bangladesh’s growing relations with China and Pakistan’s move to develop a healthy tie with Bangladesh.

The relations between Bangladesh and India are historical as many Indian soldiers sacrificed their lives in Bangladesh’s war of independence in 1971.

That relations cannot be compared with anything, they say, adding that the relations of the two countries are a role model of the global politics.

“The top leadership of the two countries has taken their relations to new heights through their political prudence,” he said.

“We’re very good friends and are deeply connected with each other’s joy and sorrow,” he added.

Momen said the key foreign policy of Bangladesh is to resolve disputes with neighbours through discussions.

The minister said the Ganges Water Sharing Treaty, the Land Boundary Agreement and maritime boundary have been resolved through bilateral discussions.

During Modi’s visit to Dhaka, both the countries signed about eight agreements, 10 MoUs, a consent letter, two exchanges of documents and a protocol (renewal).

Modi also announced a fresh US $2 billion line of credit for Bangladesh and promised quick implementation of the earlier line of credit of US $800 million and full disbursement of US $200 million.

The deals dedicated to enhance connectivity include construction of a new rail track linking Khulna city with Mongla seaport, Kulaura-Shahbazpur railway renovation, construction of friendship bridge over the river Feni, agreements on Dhaka-Shillong-Guwahati Bus Service and its Protocol and Kolkata-Dhaka-Agartala Bus Service and its Protocol, Agreement on Coastal Shipping between Bangladesh and India, Protocol on Inland Water Transit and Trade (renewal) and Memorandum of Understanding on the use of Chittagong and Mongla Seaports.

Modi and Hasina jointly launched the bus services between Dhaka- Guwahati and Dhaka-Agartala to facilitate cross-border transportation between the two neighbouring countries more convenient and accessible.

Deals were also earmarked for enhancing economic cooperation including renewal of the Bilateral Trade Agreement, the Bilateral Cooperation on Agreement between Bangladesh Standards & Testing Institution (BSTI) and the Bureau of Indian Standards (BIS) on Cooperation in the field of Standardization, Memorandum of Understanding between Bangladesh and India for extending a new Line of Credit (LoC) for $2 billion by the government of India to the government of Bangladesh, Memorandum of Understanding on Blue Economy and Maritime Cooperation in the Bay of Bengal and the India Ocean, Agreement between Bangladesh Submarine Cable Company Limited (BSCCL) and Bharat Sanchar Nigam Limited (BSNL) for leasing of international bandwidth for internet expansion, allocating special economic zones at Bheramara and Mongla for Indian investors and establishing Border Haat at Kamalasagar in Tripura.

The main aspects of the India-Bangladesh Joint Statement during the official visit of the Prime Minister of Bangladesh to India on 5 October, 2019 are efforts on border security and management, and how both the countries are working towards a win-win partnership.

These points include closer coordination between border forces to bring down the loss of civilian lives, simplifying people-people movement and entry/exit in checkpoints at Akhaura (Tripura) and Ghojadanga (West Bengal), closer cooperation against extremist and radical groups, terrorists, smugglers, smuggling of fake currency, and organised crime, a bilateral Comprehensive Economic Partnership Agreement, discussions on Integrated Check Posts; enhancing cooperation in the area of disaster management, withdrawal of port restrictions traded through Akhaura-Agartala port, discussions on anti-dumping, anti-circumvention duties imposed on multiple products, including on just products, from Bangladesh to India; and increasing the number of Border Haats to 12.

Apart from these, Bangladesh also expresses its gratitude to India for its support during the Liberation War against Pakistan in 1971.

Sheikh Hasina returned to Bangladesh in 1981 after nearly six years in exile.

Diplomatic sources further say both the countries must move together for the peace, prosperity and regional security.

Both the premiers also maintain a healthy relation too as they speak on the same tune on international issues.

Breaking the protocol, Indian premier Modi received his Bangladesh counterpart Sheikh Hasina at the airport on her four-day official visit to India in 2017.

While inaugurating the Dhaka-Kolkata Maitree Express, Sheikh Hasina and Narendra Modi called for strengthening the bilateral relations further between the neighbouring countries for ensuring growth and prosperity.

“We want to build a peaceful abode in South Asia with the support of India and neighbouring countries in where we can live peacefully and run constructive activities for the interest of the people,” she said.

“This is not only a rail link connection rather it will also help us move forward in socioeconomic sectors, capitalising the bond between the two nations,” she said.

Modi also stressed the need for increasing people-to-people contact between the neighbouring countries and holding meeting among the top leaders every often.

“Our bonds have reached new heights today,” he said.

Sheikh Hasina said the Bangladesh-India relations are in fact setting new high standards of bilateral cooperation in the region and beyond.

“I am sure we would be having many more similar, happy occasions in the days ahead for more benefits of our people,” she said.

Mentioning that connectivity is one of the main pillars of Bangladesh-India cooperation, the Bangladesh PM said the two countries are not only connected through rail, road, inland water and air, but also connected through internet bandwidth, coastal routes and power grid.

“These new modes of connectivity are adding diverse dimensions to our overall connectivity architecture ... I am happy to note that we have recently extended our connectivity to the space too,” she said.

The premier said the vision of Father of the Nation Bangabandhu Sheikh Mujibur Rahman who conceived the idea of regional cooperation in 1972 still remains Bangladesh’s constant guide.

“I am sure these connectivity initiatives will further consolidate this vision,” she said.

Pointing out that development and connectivity are connected together, Modi said they have taken some more steps towards strengthening the relations between the two countries which are century-old historical links, especially among the people of West Bengal and Bangladesh.

“Whenever we talk of connectivity, I always feel the vision of restoring our pre-1965 connectivity. I am very happy that we are continuously moving forward in this direction,” he said.

“Being a trusted partner in the development work of Bangladesh is a matter of pride for India,” he said.

Modi said the most important dimension of connectivity is ‘our people-to- people connectivity’.

Indian Home Minister Rajnath Singh recently said India would not take any move which would affect the interests of Bangladesh.

“The friendship between India and Bangladesh will remain unchanged. India will not take any move which will affect the interest of Bangladesh,” Singh said.

“The government of India thinks that the relations between the two countries have improved during the Awami League-led government,” he said.