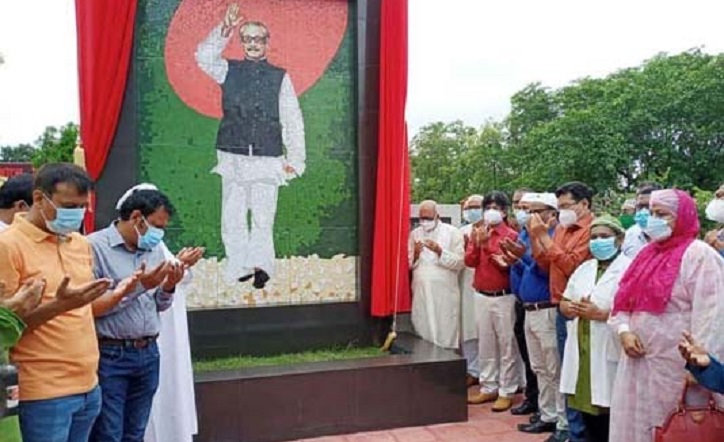 A mural of Father of the Nation Bangabandhu Sheikh Mujibur Rahman was unveiled at Khulna Medical College (KMC) aiming to inspiring students to know about life and works of Bangabandhu.

Khulna city mayor Talukder Abdul Khaleque inaugurated the newly constructed “Chiranjeev Mujib Mural” on the premises of the KMC as the chief guest on Thursday.

The mural was unveiled on the occasion of birth centenary of the Father of the Nation Bangabandhu Sheikh Mujibur Rahman.

The mayor said all the people should know about the life and works of Bangabandhu to materialize his dream of building a “Sonar Bangla” (Golden Bangladesh).

He said all people irrespective of political affiliation must follow the ideals of Bangabandhu Sheikh Mujibur Rahman as he liberated the country for all.

He added Bangabandhu’s role was pioneering in every movement from the started since language movement of 1952 to the general elections of 1970 to fulfill the hopes and aspirations of the people of this country.

“We have to make a concerted effort to inspire the next generation of this country with the spirit of the liberation war and the ideals of Bangabandhu, he said, adding that the name of Bangabandhu could not be erased from the people’s mind till Bangladesh exists”.

Giving a salient feature of the mural, KMC Principal Prof Dr. Ahad said the attractive out-looking installation will furthermore brighten the image of the college.

After the inauguration of mural, the mayor inaugurated the tree plantation programme on the premises of KMC marking the birth centenary of Bangabandhu Sheikh Mujibur Rahman.

Later, the mayor joined a view exchange meeting with the urban health in Khulna and the delegation of CDC NGOs coming from the United States at the conference room of Nagar Bhaban.

The delegation members expressed interest to work in Khulna on Urban Clinic and Coronavirus (Covid-19) infection.

The city mayor joined another view exchange meeting to the delegations of Khulna University led by Vice-Chancellor of KU Mohammad Fayekuzzaman on the implementation of Sustainable, Healthy and Education Friendly Cities and Mahalla (SHLC) projects in the city at conference room of Nagor Bhaban of KCC.

At that time, the mayor said, all possible cooperation will be given to implementation of this project.

A memorandum of understanding (MoU) was signed with KCC and KU authorities for the implementation of this project.