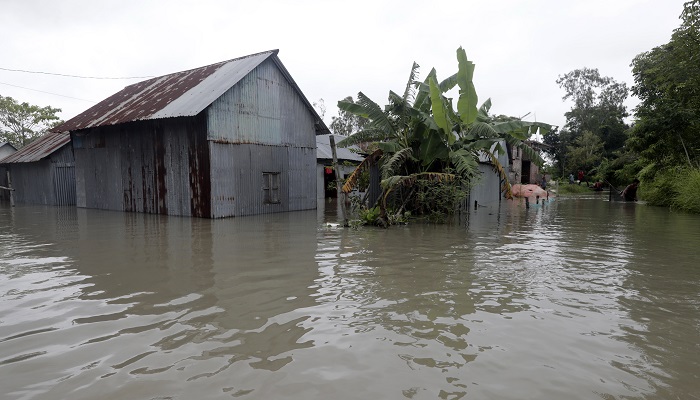 The overall flood situation in the country has deteriorated further as fresh areas have gone under water due to a massive rise in river-water levels in the last couple of days, leaving several million people marooned.

A huge onrush of upstream water has increased the water level in major rivers, inundating new areas in the northern, northeastern and central regions.

The flooding in Kurigram, Gaibandha, Jamalpur, Natore, Bogura, Sirajganj, Sherpur, Sylhet and Sunamganj has worsened further for the swelling rivers.

Thousands of flood victims are suffering much from acute shortages of food and drinking water. They are crying for relief.

Some 3.04 million flood victims in 21 districts have been passing miserable life due to the second spell of flooding, according to the National Disaster Response Coordination Center (NDRRC).

The displaced people have been passing their days under open sky as their dwellings were washed away by floodwater and waterborne diseases like diarrhoea have broken out in the flood-hit areas.

According to the Flood Forecasting and Warning Centre, the flood situation is likely to worsen further in Kurigram, Gaibandha, Natore, Bogura, Jamalpur, Sirajganj, Tangail and Naogaon in the next 24 hours.

“Because of heavy rainfall and upstream water from bordering areas, water flows from Brahmaputra and Jamuna rivers have increased rapidly and it will continue for the next 72 hours,” said Md Arifuzzaman Bhuiyan of the FFWC.

The water flow of Ganges-Padma river basin is in static state and it will continue till 48 hours, he said.

Rivers around Dhaka city has been rising and it will continue to rise in the next 48 hours. Balu river at Demra points may cross danger level, it said.

River water was rising at 57 of the 101 points observed by the warning centre in the morning.

Twenty major rivers are flowing above their danger mark at 30 stations on Thursday, the FFWC said.

In Kurigram, houses of 200 families at Burirhat in Razarhat upazila were flooded as 50 metres of a 350-metre spar along the Teesta River at Burirhat point was washed away by floodwater.

According to the District Relief and Rehabilitation Office, some 475 villages in nine upazilas have been flooded while 500 families are facing risk of riverbank erosion. Besides, 55,000 houses were affected by flooding and riverbank erosion.

In Sherpur, two people died in separate incidents in Sadar and Nakla upazilas.

Of the deceased, Bhushi Mia, 50, of Bausha area in Nakla upazila died of snakebite while fishing in floodwater, UNO Zahidur Rahman said.

Besides, Umela Begum, 50, wife of Abu Bakar of Kandapara in Sadar upazila, drowned in floodwater.

In Natore, the flood situation worsened further due to the increase in water levels in all rivers, leaving several hundred people marooned.

Most people in Singra upazila have taken shelter in different government schools.

Besides, floodwaters have inundated 8,831 hectares of cropland in the district.