Coronavirus: China's workers and graduates fear for their future 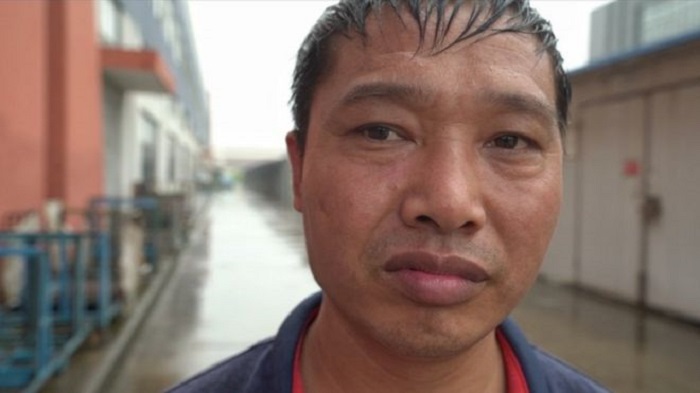 Huang waits by a workbench for the welder to pass the next metal tray. There's only a handful of staff in the factory. Half the building is in darkness.

The boss is stranded in Europe. They haven't had any new orders from their American customers for months.

This is a business that's desperately trying to keep the lights on.

"Up until now we haven't received any substantial mass production orders to keep the factory running and to be able to pay salaries and to be able to stay afloat," Yuliya Yakubova told me. She was blunt about the business she runs.

Speaking from Italy she said, "The last [thing] I want to do really is fire or let go employees." But she doesn't have long left.

Lotus United is a business that's hanging on. In an industrial park in Jiangsu near China's east coast it makes the rails and the racks for the shops that some of you go to. Or at least it used to.

Two floors of manufacturing, around 100 employees, have been reduced to only a handful of staff turning up every day.

Most of the machines are now switched off, cardboard boxes stacked up, piles of rusty inventory on the floor.

Huang Xuefeng is not very busy. Before we met there were a few sparks flying over in a corner. The white glow of welding at a workbench. 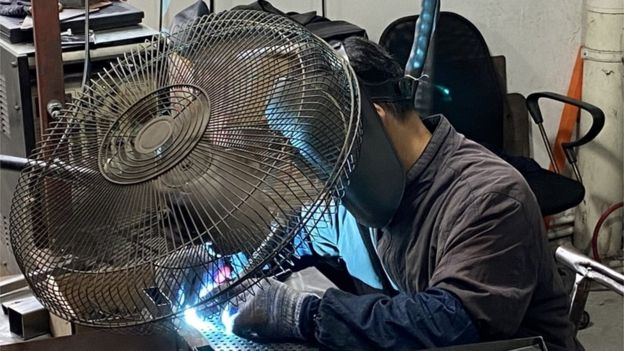 But the disastrous shutdown brought by the virus has reduced this company to a handful of workers, tucked away in a corner.

"The money I earn now can only guarantee basic living," he said. His family has been hit hard because his wife works at the factory too.

They are a tiny, tiny part of China's vast wave of migrant workers.

When I met him they were eating lunch together during a 25-minute break.

If the company goes under they'll lose their pay, and their free lunch. There will be nothing to send back home to their daughter. "I came here in 2012. [She is being] raised back home as I can't afford it."

Privately-owned companies like Lotus create the most new jobs in China. But they are particularly vulnerable in this crisis.

In recent years the government and the Communist Party has been more focused on consolidating and protecting state-owned enterprises: the industrial, transport, telecoms and financial giants that they own.

Add to this small companies' over-reliance on doing business in the US - it only has American customers - and it is clear that Lotus is very, very vulnerable. One hundred jobs are on the line.

An impending unemployment crisis is the stuff of nightmares for China's leaders. The ruling Communist Party worries incessantly about the effects on social stability.

Small but visible protests sprang up in Wuhan in April. Workers in a shopping centre gathered to demonstrate against rents they could no longer afford.

The official jobless total in China's cities has already hit the government's target. There are independent forecasts that it could go much higher.

China's number two politician, Premier Li Keqiang, acknowledged the scale of the problem last month when he said: "The truth is that in April that figure already hit 6 percent... Employment is the biggest concern in people's lives. It is something of paramount importance for all families."

Addressing workers at firms like Lotus, Li said: "Many export companies have no orders now, which has greatly affected their employees.

"We must provide support to all these people and businesses in difficulties, but most importantly, we must help them land jobs."

But there is one group the party is particularly worried about: graduates. 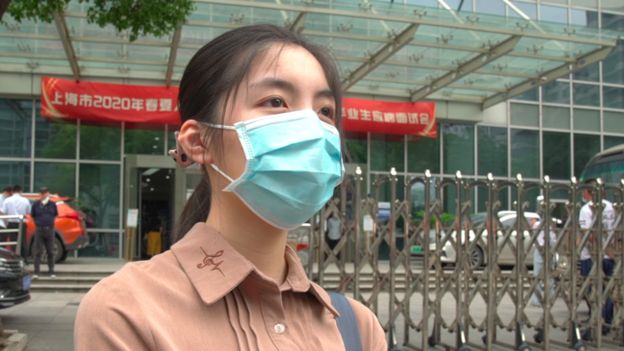 There are fewer jobs to go round. Li has admitted the outlook for them is "grim".

Outside a recruitment fair in Shanghai, 23-year-old Zhang told us: "Yes, we have pressure. We can't find jobs but also we don't want to stay at home doing nothing."

She is pessimistic. "I expect it won't get better within a year."

Many of the job fairs have gone online. Graduates are looking down a phone camera with a mask on hoping to land their first big job. "We don't have any internship experience and we didn't go to the autumn job fair," Zhang explained.

In China's past, the government used to assign jobs to them. But that is long gone.

Provincial governments and state-owned firms are being encouraged to recruit graduates. There are tax breaks on offer.

This is a critical issue for economic recovery and political legitimacy. Young, educated, unemployed, restless and resentful graduates have repeatedly been a problem for the ruling party.

Back at the factory, via Italy, Ms Yakubova has her chin up. "I am hopeful that after one, two, I don't know, three months, let's say in the near future, that we can restart."

Some staff have already quit to find other work. The minimum wage she was forced to put them on was not enough.

Huang and his wife are staying, but they have a plan. "We are under great pressure to live here," he said. "The rent, the cost of living... if we can't hold on we will leave."

They will go back up north if the jobs end, and become corn and wheat farmers again.

Millions of migrant workers like them could do the same. It would be an unpredicted reversal of China's decades long vast urbanisation.