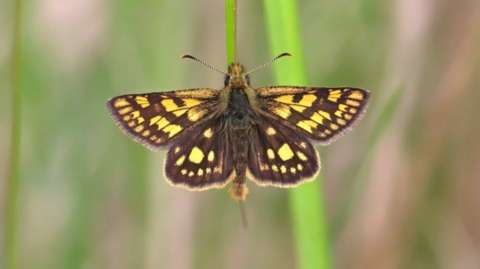 The release of a last batch of a rare butterfly that was reintroduced to England after more than 40 years was prevented by the lockdown.

The chequered skipper was always scarce but died out in 1976 due to changes to woodland management.

Butterflies caught in Belgium, and brought to the UK on Eurostar, were released at a secret site in Rockingham Forest, Northamptonshire, two years ago as part of a project by wildlife charity Butterfly Conservation.

And last summer, offspring from the adults were spotted.

Another batch of 24 Belgian chequered skippers was introduced last year, but the Back from the Brink project said they had not been able to do the final release as planned.