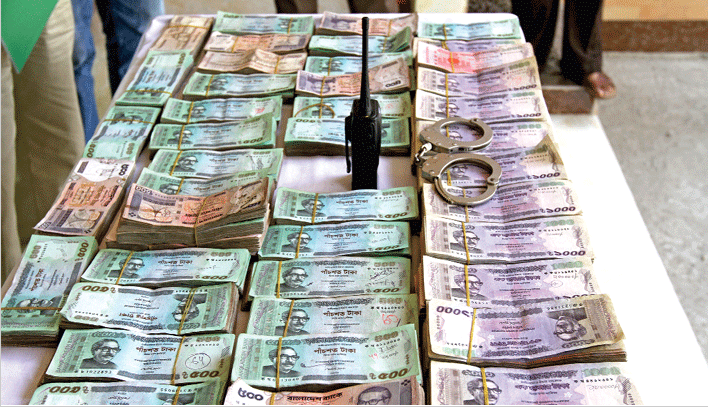 The forgery of bank notes happens all year round, but before Eid the artifice gets momentum as people spend a lot on shopping marking the occasion.

Fake note makers are up and spreading crores of counterfeit bank notes across the country ahead of the upcoming Eid ul-Azha.

According to sources, the demand for counterfeit money has increased ahead of Eid as retailers are able to exchange counterfeit money easily.
Fake note makers are found adopting new techniques to make such notes avoiding detection, according to law enforcers.    Every time the law enforcers manage to nab some fake note traders, the real culprits slip through the net and remain at large.

Recently, members of several such gangs have been caught by the lawmen.

Detectives reveal that a dozen of money counterfeiting gangs are active ahead of Eid ul-Azha.

Rapid Action Battalion (RAB) has arrested two members of a counterfeit money-making gang and seized forged notes amounting to Tk1 crore on Monday July 20 from Moghbazar area in the capital.

RAB-2 Deputy Commander Major HM Parvez Arefin said the nexus has some wholesale counterfeit trade. Those who are in the field level can easily sell this money in the market.
He also said: “The fake note makers get orders on mobile phone from different places. So, it is difficult to know who is buying.”

“The most alarming thing is that last week this nefarious nexus released counterfeit notes worth Tk70 lakh.”

The arrestees are Md Saiful, 32, the ringleader, and his two associates Md Rubel, 28, and Alam Hossain, 28.

Razib Al Masud, deputy commissioner of DB Lalbagh division, said Saiful was arrested earlier and a case was also found to be registered against him.

“We have come to know that the gang used to spread fake notes using four members Habib Mollah, Jibon, Mujibor and Rana in the market. We arrested them earlier but they secured bail and went back to forgery again,” he added.

On June 29, Rapid Action Battalion arrested six members including two women of a note forgery syndicate from Vatara area in the capital.

RAB said the arrestees used to boil original Tk100 banknotes in water and once the colour was washed away, they printed the colour of Tk500 note on the Tk100 note papers.

This is why the paper and security measures on the counterfeit notes are the same as the original banknotes.

Sources said the forger made two types of fake notes, one is printed fake note and another one is washed fake note.

Printed fake notes are made with new papers while the washed ones are made by washing the original notes.

Washed fake notes are also made by rubbing off Tk100 note (nearly equal in size of Tk500) by chemicals, and later they print them with a higher denomination of Tk500, he added.

Meanwhile, a number of special teams of Rapid Action Battalion (RAB) and Detective Branch (DB) have already been deployed to prevent the circulation of fake currency notes ahead of Eid.