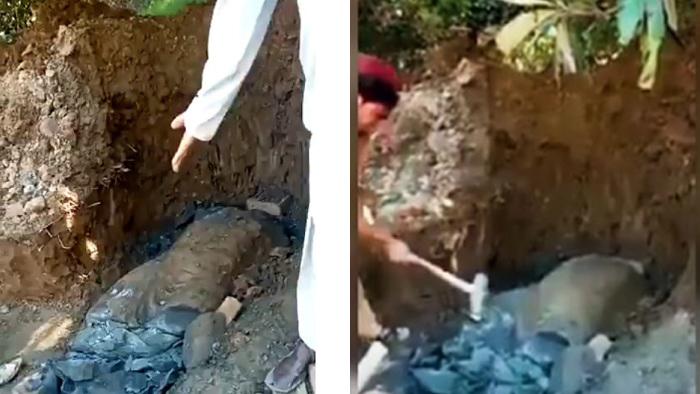 Religious intolerance in Pakistan has now reached another level with discrimination and crimes against the minorities not just limited to destroying temples of the Hindu community and places of worship for Christians.

The Buddhist Ruins of Takht-i-Bahi (Throne of Origins) and the neighbouring ancient city remains at Sahr-i-Bahlol, listed by UNESCO in the World Heritage List as one of the most imposing relics of Buddhism in the Gandhara region of Pakistan, are now being razed by the fanatical supporters of radical maulvis (clerics).

Located in Mardan, Khyber-Pakhtunkhwa, the archaeological sites are the most characteristic examples of development of monastic and urban communities in the Gandharan region between the 1st to 7th century AD.

Several shocking videos went viral on social media Saturday of a man destroying a life size statue of Buddha at the instructions of a maulvi asking it to be turned into rubble.

The statue was discovered a few days ago and is believed to be demolished Friday (July 17). The local maulvi was overheard telling the man demolishing the structure that “he would lose his imaan (belief) and his nikah (marriage) will also not remain valid anymore.”

Till now even Unesco believed that Takht-i-Bahi was “exceptionally well preserved” and “escaped successive invasions” over the last several hundred years due to its location on high hills.

What the organisation may have failed to realize is the changing face of Pakistan where Islamic fundamentalists call the shots now. Agencies like the Provincial Department of Archaeology (Province of Khyber Pakhtunkhwa) situated in Peshawar, entrusted with the job of preserving both component parts of the Buddhist Ruins of Takht-i-Bahi and Neighbouring City Remains at Sahr-i-Bahlol, have only turned out to be a mute spectator.

Several structures in Pakistan could meet the same fate like the “Buddhas of Bamiyan”.

Systematic, uncontrolled, state-aided destruction of not just the heritage of minorities, like the foundation of the first Hindu temple in capital Islamabad last month, but also the forced conversions, abductions and killings of Hindus, Sikhs, Christians and other faiths continues unabated in Pakistan.

“I want to warn our people that anyone in Pakistan targeting our non-Muslim citizens or their places of worship will be dealt with strictly. Our minorities are equal citizens of the country,” Pakistan Prime Minister Imran Khan had said earlier this year in a bid to show the ‘tolerant’ face of his country.

However, Khan’s vision of ‘Naya Pakistan’ is full of regressive extremist ideologies.

In a detailed report titled, ‘Pakistan: Religious freedom under attack’, released last December, the Commission on the Status of Women (CSW), a commission of the United Nations Economic and Social Council, had expressed deep concern over the extremely volatile human rights situation in Pakistan.

“The situation for freedom of religion or belief (FoRB) in Pakistan continues to deteriorate. Multiple violations continue to take place under the leadership of Prime Minister Imran Khan,” the report mentioned.

“Christian and Hindu communities remain particularly vulnerable, especially women and girls. Each year hundreds are abducted and forced to convert and marry Muslim men. Victims have little or no hope of being returned to their families due to the serious threats and intimidation from abductors against the girls and their families. This is compounded by the lack of police will to take action, weaknesses in the judicial process and discrimination from both police and judiciary towards religious minority victims,” it added.

Instead of improving, things have only taken a turn for the worse in Pakistan in the last seven months.

These filthy animals should be taken into court of law and a lawful action must be taken against that culprit molvi who instigated for such act.#Takhtbhai #Mardan #Archeology @KPGovernment @PeshawarMuseum pic.twitter.com/UMQIqKTihM