People in death fear for ‘failure’ to check corona: BNP 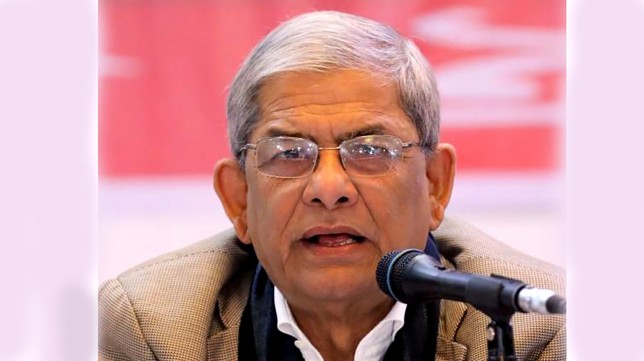 BNP secretary general Mirza Fakhrul Islam Alamgir on Wednesday said the country’s people are suffering from a sense of death fear due to the government’s failure to tackle the coronavirus situation.

"Death fear has gripped the people of the entire country as the government has failed to deal with the coronavirus pandemic. People are also worried about their livelihoods,” he said.

Fakhrul came up with the remarks while speaking at a virtual discussion arranged by Bangladesh Nationalist Research and Communications (BNRC) in memory of late BNP leader Shahjahan Siraj.

Former Forest and Environment Minister Shahjahan Siraj died on July 14 at the age of 77, after a long battle with cancer.

Fakhrul alleged that the government has snatched people’s right to elect the representatives of their choice through fair polls only to cling to power.

“It’s pitiable that those who say they hold the spirit of the Liberation War have consciously taken away people’s basic and voting rights. We didn’t want to see this Bangladesh. They (Shahjahan Siraj and other freedom fighters) wanted to see a happy and prosperous Bangladesh. But what’re we seeing today?’ the BNP leader questioned.

He said there is no alternative to forging a national unity to get rid of the current situation and restore people’s rights and the spirit of the Liberation War. “We want to forge a national unity as we did in 1971 to build a Bangladesh as dreamt by freedom fighters.”

The BNP leader recalled the contributions of Siraj to the Liberation War and his role in conserving the environment, banning polythene bags and removing two-stroke autorickshaw from Dhaka’s street as an Environment Minister.

Jatiya Samajtantrik Dal President ASM Abdur Rob Siraj will remain alive for his role in hoisting Bangladesh’s flag across the country and reading out the manifesto of Bangladesh’s independence on March 3, 1971.

He bemoaned that Siraj and many others who played pivotal roles in the Liberation War were not properly evaluated.