Resignation of DGHS’s DG will help recast the directorate: Hasan 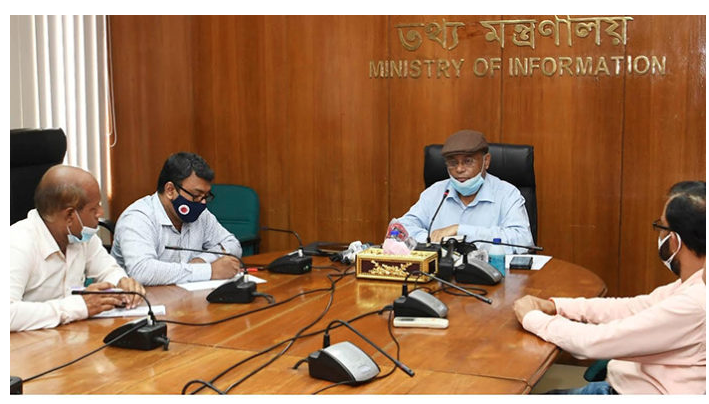 Information Minister Dr Hasan Mahmud  said on Wednesday the resignation of Director General of the Directorate General of Health Services (DGHS) Dr AbulKalam Azad would play a positive role in recasting the directorate of health services.

“I would like to thank the director general of the DGHS for tendering his resignation from the post.

Dissatisfaction cropped up among the people centring the Directorate General of Health Services, especially against its high officials,” he told reporters at the meeting room of his ministry at Secretariat here.

In the context of growing dissatisfaction among the people, the information minister said,the resignation the director general of DGHS would help recast the directorate.

Replying to a query on a comment of a BNP leader on the flood situation, Hasan questioned “Is it the first flood in Bangladesh? The country witnessed floods every year,and the water-logging took place in the Dhaka city every year.

” It seemed there were no floods when the BNP was in power, Hasan said with a note of sarcasm.

Referring to the 1991 cyclone and the 2004 flood, the information minister said there was dirty water around the houses of many BNP leaders and ministers, including BNP’s former finance minister Saifur Rahman, during the 2004 flood. And this happened as they failed to renovate the Gulshanlake, he added.

He went on saying that ithas become the habit of BNP to talk absurd. The common people will be benefited, if they (BNP) stand beside the flood victims instead of talking ridiculously, he added.

Replying to another query about some so called newspapers, the information minister termed the country’s journalists as meritorious, wise and conscious.

He said a report of a journalist can open the third eye of a society and they can give language to the speechless people and empower the powerless as well,and many journalists are doing their jobs sincerely.

He said the whole journalist community cannot be discredited because of some persons who are not journalists.

“It is very important. And we have started workingon this issue and we need cooperation from journalists, journalists’ unions and other organizations. But it will take time to bring discipline in this sector,” he added.

After the briefing, the information minister joined a meeting of The American Chamber of Commerce in Bangladesh (AmCham) through online, and inaugurated the ‘AmChamFrontline Journalism Award’.

Deputy Chief of Mission of the United States Embassy in Dhaka Ms JoAnne Wagner attended the programme as the guest of honour with AmCham President Syed Ershad Ahmed in the chair.

Speaking at the programme, the information minister congratulated the AmCham for the initiative to encourage the journalists who are working as frontline fighters along with law enforcers, health service providers and field level personnel during the Coronavirus pandemic.

Hasan put emphasis on taking preparations to tackle such situation in the future.

Reporters and TV camera persons from media houses (national level) will be able to submit their pandemic related generic/business reports, which are focused on two perspectives- the impact of the pandemic and the humanitarian ground, i.e.-impact on lives and livelihoods and in the business sector, published from 1st March to 31st August, 2020 and the deadline for submission of the reports is September 6th, 2020. The winners will be selected after a careful assessment by a highly reputable selection committee and awarded in another program.