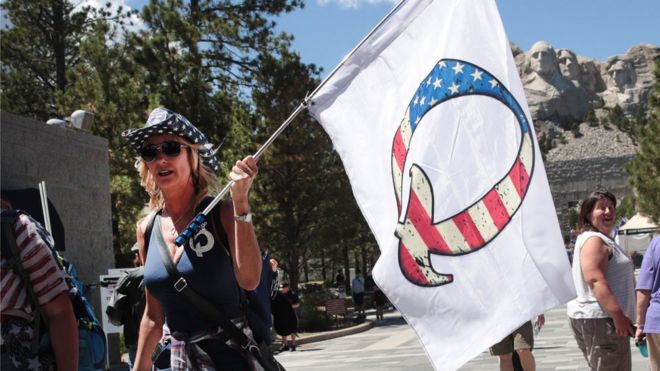 Twitter has announced sweeping measures aimed at cracking down on the QAnon conspiracy theory, including banning thousands of accounts.

The social media giant said it would also stop recommending content linked to QAnon and block URLs associated with it from being shared on the platform.

QAnon is a sprawling conspiracy theory whose followers support US President Donald Trump.

Twitter said it hoped the action would help to prevent "offline harm".

In a statement shared on the platform, Twitter said it would permanently suspend accounts that violate its policies while tweeting about QAnon.

The suspensions will be applied to accounts that are "engaged in violations of our multi-account policy, coordinating abuse around individual victims, or are attempting to evade a previous suspension - something we've seen more of in recent weeks," it said.

The suspensions are expected to impact about 150,000 accounts worldwide. More than 7,000 accounts have been removed in recent weeks for violations, Twitter said.

QAnon supporters have been linked to numerous other false claims that have spread online, including a bizarre conspiracy theory involving a US furniture company and allegations of child trafficking.

QAnon began in October 2017 on the anonymous message board 4chan. A user claimed to have top security clearance within the US government and signed off their posts as "Q" - hence the name QAnon. Q communicates in cryptic posts and claims to be directly involved in a secret Trump-led investigation of a global network of child abusers.

QAnon followed on from the "pizzagate" saga in 2016 - a fake theory about Democratic Party politicians running a paedophile ring out of a Washington pizza restaurant.

QAnon influencers have big audiences on social media. They urge followers to "do their own research" - in other words, watch YouTube videos and talk to other supporters - to solve Q's puzzles. In its nearly three years of existence, the conspiracy has drawn huge traffic on Facebook, Twitter, Instagram, YouTube and Reddit, attracting hundreds of thousands of dedicated followers. This includes celebrities and dozens of candidates running for Congress this year.

During the coronavirus pandemic, Q influencers have spread unfounded theories about coronavirus, calling it a "deep state" hoax and have promoted misinformation about face masks and vaccines.