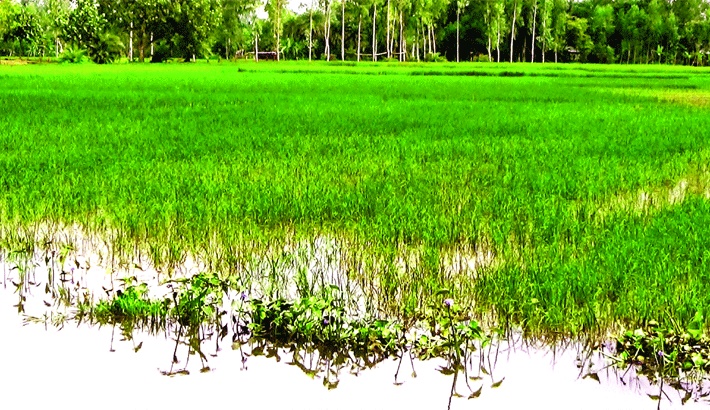 The ongoing flood situation across the country may affect the production of Aus and Aman rice, winter vegetables and other crops.

More than 62,000 hectares of land have been inundated due to heavy rainfall and onrush of upstream water from India over the last three weeks, according to the Department of Agriculture Extension (DAE).

Most of the crops on the inundated lands will be damaged if the floodwater would not recede quickly, said agriculture experts.

Aman and Aus rice seasons are the two major sources for the staple crops after Boro season. Aman comprises 37-38 per cent and Aus 7.0-8.0 per cent of the total rice output in the country.

The government has targeted to produce 3.64 million tonnes of Aush from 1.32 million hectares of lands during the April-September period.

The target is 15.37million tonnes from 5.89 million hectares of land for the Aman season (June to December).

But the ongoing flood has been posing threats to rice output prospects.

A total of 13.066 million tones winter vegetables were grown on 0.5769 million hectares of land last year. This year the target is yet to be estimated but the output is likely to be lower than last year.

The flood has been inundating fresh areas almost every day for the last seven days as major rivers were flowing over the danger mark.

Dr. Alhaz Uddin Ahmed, director of Field Service Wing at DAE, said they are yet to estimate the total crop damage as the flood is still continuing.

“Till now more than 62,000 hectares of crops land in Northern was inundated. We will estimate the damage after receding of floodwater,” he said.

Meanwhile, standing crops on 32,992 hectares of land were inundated by floodwater in all five districts in Rangpur division.

Officials of DAE and other agriculture-related departments, organisations and institutions are visiting the affected areas and suggesting ways to affected farmers to overcome the situation after the recession of floodwaters from their submerged croplands.

All of the submerged standing crops will not be damaged and some of those will suffer partial damage if floodwaters receded in three to four days.