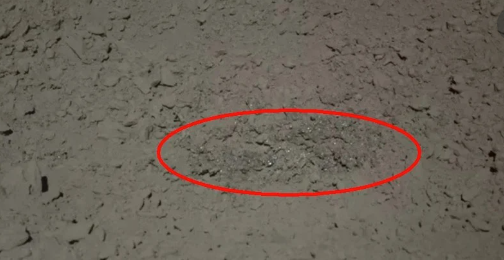 Chinese researchers have published an analysis of a gel-like substance spotted by the country's Yutu-2 lunar rover in a crater on the far side of the moon last year.

In a research paper published in the journal Earth and Planetary Science Letters, researchers from institutes under the Chinese Academy of Sciences described the substance as "a dark greenish and glistening impact melt breccia" on the floor of the Von Karman crater on the far side of the moon. It measures about 52 cm by 16 cm.

Breccia is a type of rock composed of angular fragments of minerals or rock cemented together.

The researchers compared the images taken by the lunar rover with samples brought back from the moon by the U.S. Apollo missions. They found that the substance resembled the Apollo samples, suggesting that it could be formed by some violent impact, such as a meteorite that crashed into the moon.

They said that the impact melted some lunar regolith and breccia together, which formed the substance. Lunar regolith refers to the mixture of powdery dust and broken rock that covers the surface of the moon.

The rover Yutu-2, or Jade Rabbit-2, has worked much longer than its three-month design life, becoming the longest-working lunar rover on the moon.