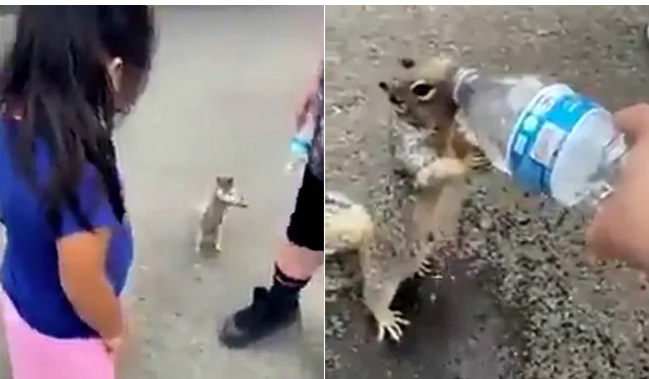 Social media users are united - for once - in sympathy for a thirsty squirrel begging for water in a video that has gone massively viral online. The video shows the squirrel getting up on its hind legs and following a man around, as if 'begging' for water. It surfaced on Reddit a day ago, and has since reached different social media platforms like Twitter, melting hearts on each of them.
The video begins by showing a squirrel on a road as a man and a girl watch it. The squirrel, spotting a water bottle in the man's hands, gets up on its hind legs and repeatedly gestures at him with her front paws until the man leans down to offer his water bottle to the rodent. Obviously thirsty, the squirrel puts its tiny mouth to the bottle and begins sipping water - going strong until the whole thing empties in just a few seconds.

Indian Forest Service officer Susanta Nanda was among those who shared the video on Twitter. "Squirrel asking for water," he captioned it. Take a look at the video below: