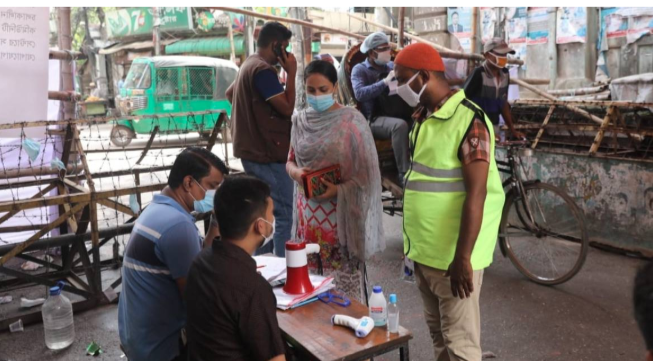 Though it appears that the number of corona cases has marked a fall over last two weeks, health experts said the positive case rate is actually now higher than in the past as the transmission is gradually growing for lack of effective preventive measures.

They also said the Directorate General of Health Services (DGHS) has taken a ‘suicidal’ decision of reducing the number of daily corona tests in the country at a time when the infection rate is rising alarmingly.

According to them, many infected people are now out of detection and they are turning ‘super spreaders’ of the virus. And for this, they said, the country will enter a long transmission cycle, wreaking havoc on human health, society, economy and every sector.

However, DGHS authorities attributed the decline in the number of tests to change in the definition of recovery, discarding the follow-up or second tests, inclement weather or flooding in different areas, the imposition of test fees and people’s lesser concern over the virus infection.

The health experts said people’s confidence in the corona testing systems has eroded due to test scams by JKG and Regent Hospital, a complicated system for registration of test and delay in report delivery.

According to the DGHS, 3,533 confirmed coronavirus cases were detected during the past 24 hours as of Wednesday, increasing the total cases to 193,590.

It said 14,002 samples were tested in 79 labs across the country during the period and the infection rate is 25.23 percent while the infection rate is 19.75 percent against the tests carried out up to now. This has so far been the highest single-day positivity rate. The previous highest rate of 24.95 was also recorded two days back on Monday, manifesting the high transmission of the virus.

Contacted, Prof Dr Nasima Sultana, additional director general of the DGHS, said it is still not clear whether the virus infection has decreased or increased. “The current data shows the transmission has increased and the rate is gradually growing. “But this is also true that people are not undergoing unnecessary tests now. Only suspected people are coming for tests. So, it’s usual that the infection rate will be higher than the previous time.”

She said now they have the capacity to conduct over 20,000 tests every day, but people are showing little interest in giving their samples and it indicates that the virus may show a falling trend.

“Now we don’t conduct follow-up tests as the definition of recovery has changed. People in flood-hit areas also can’t properly undergo tests. It also seems people’s worry about the virus has decreased a lot. Earlier, the sample test was scheduled from 11am to 3pm. Even after 3pm, many people were seen standing in queues. But now no one is found after 1pm. So, the sample test has declined,” Nasima said.

But according to DGHS website data, around 23 lakh corona suspects have called the hotline numbers of the directorate expressing interest in the test over the last 13 days.  Of them, only around 1.90 lakh people had been able to undergo tests.

A virologist at Dhaka Medical College said the testing system has been made harder discouraging people to avoid tests. “One has to register in advance for the online sample testing. Once the prescribed number is met, there is no chance of registration.”

He said though a smaller number of samples have been tested, over 24 percent infection rate has been recorded for the few days. “It indicates the virus is still showing an uptrend.”

He voiced concern that the fall in the number of tests is only contributing to the spread of the virus since many infected people are remaining undetected, and they are freely moving everywhere.

Prof Nazrul Islam, also a member of the National Technical Advisory Committee (NTAC), said the current daily poor testing rate does not represent the real corona situation in the country.

“It’s our bad luck that the fee on corona tests was imposed on July 2, and the number of tests started dropping from July 3. But there’s no alternative to increasing the number of tests and identifying the infected people to contain the virus transmission,” he observed.

Prof Nazrul said the country should conduct at least 25,000 sample tests every day to know about the genuine corona situation, and now it has that capacity as the number of laboratories has increased substantially.

The noted virologist said it is fact that people are also showing lower interest in undergoing the Covid test these days due to the imposition of a fee, providing false test reports, hassles in providing samples and delay in having test results. “People are losing confidence in the testing system due to JKG and Regent Hospital’s scams. People aren’t only less serious about the test, but also about wearing masks, social distancing and health hygiene rules. It’s a dangerous sign.”

Contacted, Prof Be-Nazir Ahmed, former director (disease control) of the DGHS, said, “The corona infection rate is still increasing in our neighbouring country, India, which was hit by the virus well before us. What we’ve done more than them that the virus would decline in our country! The main thing is that the test has declined at a time when the infection has increased.”

When Wari went under lockdown, he said, 50 percent people of the area who underwent tests found positive for the virus. “These are hidden patients. If we can’t trace the hidden patients, the infection will gradually rise. If we want to control the situation, we must scale up tracing, testing, isolation and quarantine across the country. Or else, it’ll enter a long transmission cycle, wreaking havoc on human health, society, economy and every sector.”

Prof Be-Nazir said the DGHS is either trying to hide the real scenarios or they do not have the capability and enough data about the corona transmission.