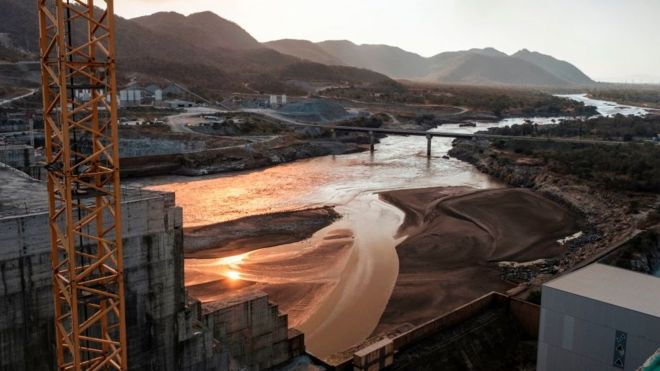 Sudan says River Nile water levels have dropped as a reservoir behind Ethiopia's Grand Renaissance dam has filled up, hitting out at "any unilateral actions taken by any party".

Both Sudan and Egypt are downstream, and fear the large dam will greatly reduce their access to water.

Ethiopia sees the hydroelectric project as crucial for its economic growth and improving electricity supplies.

But state media have backtracked after reports on Wednesday that suggested the dam was being filled deliberately, though without making it clear whether the dam's gates had been closed.

Dialogue and a fair solution were needed, Sudan's Information Minister Faisal Saleh was quoted as saying on Monday by Reuters.

Years of fraught negotiations have failed to reach a consensus on how and when to fill the reservoir, and how much water it should release.

Egyptian Foreign Minister Sameh Shoukry has previously warned that filling and operating the dam without an agreement "that protects the downstream communities… would heighten tensions and could provoke crises and conflicts that further destabilise an already troubled region".

A conflict between Egypt and Ethiopia, which are both US allies, would put millions of civilians at risk.