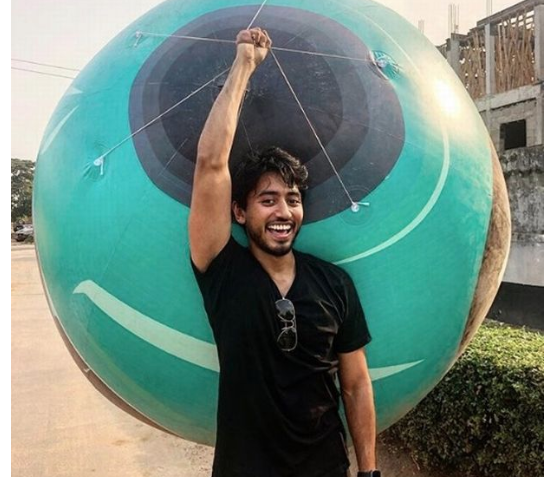 A CCTV footage showed that the ‘grim reaper’ hitman dressed in a ninja suit pursued Fahim Saleh from the elevator and followed him into the apartment before committing the murder.

Fahim, a tech entrepreneur and co-founder of Bangladeshi ride sharing app Pathao, was found dismembered in his luxurious condo in New York City of the USA on Tuesday.

He, also the CEO and founder of Gokada, a motorcycle ride sharing app in Lagos, Nigeria, was the rising star in the tech world garnering tremendous success at his 33.

Quoting police sources British Tabloid The Sun reports that it was a cold-blooded murder with ‘financial motive in behind.’

The hitman was professional while committing the grisly murder and intended to remove all the evidences from the scene so that it looks like nothing happened there, police suspect.

The surveillance video from the building's lobby showed the suspected hitman entering the elevator with Saleh at approximately 1:40pm on Monday.

The suspected killer was reportedly dressed in all black and carried a bag.

The CCTV footage showed Saleh using a key fob to access the seventh floor as the suspect pretended to press a button for another level, sources said.

Both Saleh and the suspect reportedly exchanged words inside the elevator.
When the young CEO stepped out of the elevator and got into his apartment, the man in black followed him.

The last moment recorded before the doors close is the killer zapping the victim with a Taser.

Cops have not yet released any information on any potential suspects.

In the floorplan, an egress staircase is seen across from the elevator in which Fahim Saleh and the hitman were.

Footage appeared to show the 33-year-old tech boss being attacked when he got off the elevator, which opens up directly into his apartment.

Saleh's sister found his dismembered body inside his condo at around 3:30pm Tuesday after she hadn't heard from him for around a day.

Cops have deemed his death as a homicide and have said that no arrests have been made as of Wednesday morning.

NYPD spokesman Sgt Carlos Nieves said, "We have a torso, a head that's been removed, and legs. Everything is still on the scene."

The motive of Saleh's murder appeared to be financial in nature, a senior NYPD official told WBBH on Wednesday.

A source told Daily News that the killer bolted via a staircase after Saleh's sister buzzed up to the apartment and got into the elevator.

The source said "he was dressed like a ninja, full out, so you can’t even see his face. He clearly knew what he was doing. We think his intent was to get rid of the body parts and go back and clean it up and make it look like nothing happened. He left before he finished the job."

A close friend of his, who was not identified, told WNBC that she initially thought it was a prank when Saleh's sister and best friend called her to inform her of his passing.

The friend also told the outlet that "one of the neighbors heard screaming and very loud noises when this happened."

"I don't know why the neighbors didn't call the cops," she added.