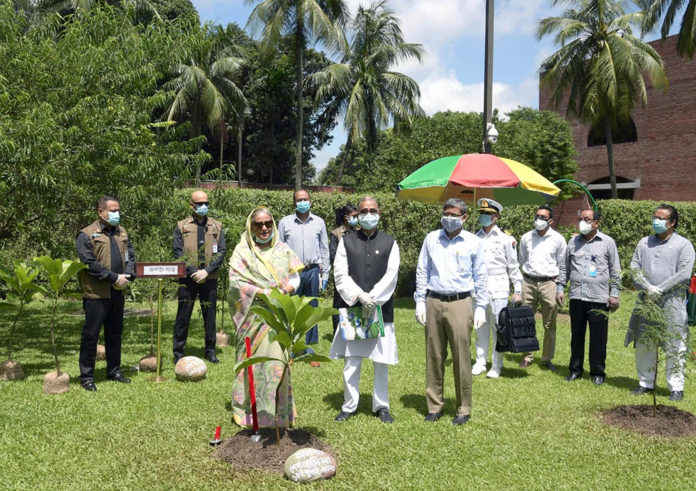 Prime Minister Sheikh Hasina reiterated her firm optimism that the country will advance again and the people will get rid of the ongoing crisis by combating the coronavirus.

“Though the coronavirus has temporarily halted the country’s advancement, we hope the people will be free from it and we’ll move forward again,” she said while inaugurating the distribution and plantation of one crore saplings across the country marking the “Mujib Borsho” (Mujib Year).

The prime minister said coronavirus is not a problem for Bangladesh alone, it is a worldwide problem. “We pray for all on the globe so that they get rid of the pandemic,” she said.

Talking about her imprisonment day today, Sheikh Hasina, also the Awami League president, said today is a special day as the then caretaker government arrested her on this day in 2007 by filing false cases.

“I express my gratitude to the people of Bangladesh, expatriate Bangladeshis and the world leaders as well as thank millions of leaders and workers of Awami League and its associate bodies for their protest against my imprisonment,” she said.

She mentioned that Dhaka city Awami League collected 25 lakh signatures of the people demanding her release and submitted those to the caretaker government.

The premier said the caretaker government was forced to release her due to the protests of the people and pressure from the national and international levels.

Sheikh Hasina said 12 false cases were lodged against her by the BNP-Jamaat government, while the caretaker government filed five more false cases.

“I, that time, said every case will have to be investigated and that was done, and by the grace of Allah I was acquitted from all the cases following their probe,” she said.

Expressing her heartfelt gratitude to the people, the premier said she got released on June 11 in 2008 due to their overwhelming support.

Pointing out that working for the country and the nation is her responsibility, Sheikh Hasina said she learnt it from Father of the Nation Bangabandhu Sheikh Mujibur Rahman.

“I learnt from Bangabandhu to face any situation and overcome adversities remaining in the honest way,” she said.

Sheikh Hasina, also elder daughter of Bangabandhu, renewed her vow to build a hunger-and-poverty-free Bangladesh as dreamt by the Father of the Nation.

“Bangabandhu brought independence of the country and we want to build a hunger-and-poverty-free country following his ideology … we believe that we could do it Insha Allah,” she said.

Earlier, the prime minister launched the distribution and plantation of one crore saplings across the country by planting three trees – ‘chalta’, ‘tentul’ and ‘chhatiyan’ – on the Ganabhaban premises.