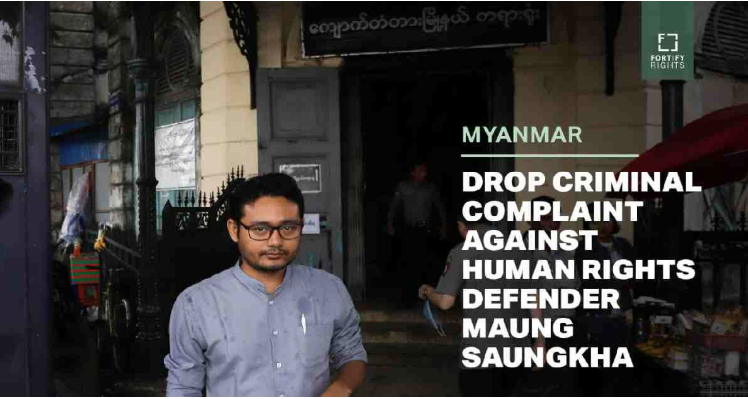 The Kyauktada Township Court in Yangon opened the trial on July 7 and held its second hearing on July 14.

At the 44th session of the United Nations Human Rights Council in Geneva this week, the new UN Special Rapporteur on the situation of human rights in Myanmar, Thomas Andrews, expressed concern that freedom of expression in Myanmar appeared to be “shrinking” ahead of national elections scheduled for November 8.

Special Rapporteur Andrews called on Myanmar to amend laws that have been used to violate freedoms of expression and assembly.

“The Government cut the internet in conflict-affected areas of Rakhine and Chin states and continues to prosecute human rights defenders who have called for lifting internet restrictions, which is a double violation of human rights,” Maung Saungkha told Fortify Rights by phone.

On July 14, Kyauktada Township Police Captain Myo Thet testified to the court that 27-year-old Maung Saungkha organized a protest and displayed a banner with others in Yangon in violation of Section 19 of the Peaceful Assembly and Peaceful Procession Law (PAPPL), which requires advanced notice to hold a protest.

The charge carries a sentence of up to three months’ imprisonment and/or 30,000 Myanmar Kyat (US$20) in fines.

During the first court hearing on July 7, the prosecutor submitted a list of six witnesses to the court. The court hearings are set to continue on July 21.

On June 21, on the one-year anniversary of the internet shutdown in Rakhine and Chin states, activists unfurled a Burmese-language banner over the Sule overpass bridge in downtown Yangon, reading, “Is the internet being shut down to hide war crimes and killing people?”

The complaint, which Fortify Rights has seen, alleges four other people were involved in unfurling the banner but only identifies Maung Saungkha.

The Kyaukdata Township police apprehended Maung Saungkha on July 3 and brought him to the Kyauktada Township Court, which granted him bail.

“The internet blackout is wholly disproportionate. The government should immediately drop this and similar cases, amend the peaceful assembly law, and lift the internet ban, especially ahead of national elections in November.”

In recent weeks, Myanmar authorities have brought similar criminal complaints against other human rights defenders involved in protesting the internet blackout in Rakhine and Chin states.

On June 21, Ramree Township Police Major Zaw Win filed a case against Myo Min Tun, a youth leader with the Ramree Township Youth Network, for allegedly holding a protest without informing the authorities beforehand in which he called on the Myanmar government to lift the internet shutdown.

Police officers apprehended Myo Min Tun at his home on June 25 and brought him to the police station. On the same day, the Ramree Township Court charged him with violating Section 19 of PAPPL.