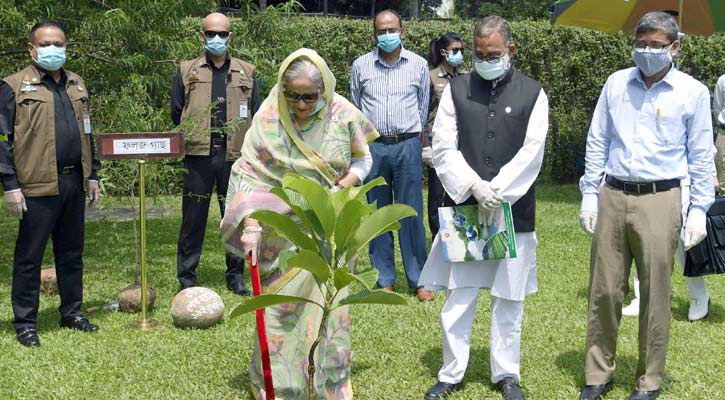 Prime Minister Sheikh Hasina on Thursday inaugurated the distribution and plantation of one crore saplings across the country as a part of the celebration of “Mujib Borsho” (Mujib Year).

The premier opened the programme by planting three saplings on her official Ganabhaban residence premises in the capital  this morning marking the Mujib Borsho, the birth centenary of Father of the Nation Bangabandhu Sheikh Mujibur Rahman.

Earlier at a virtual meeting on July 12, Minister for Environment, Forests and Climate Change Md Shahab Uddin said the prime minister will inaugurate the distribution and plantation of one crore saplings across the country by planting saplings on Ganabhaban premises on July 16.

The minister also said after the inauguration of the programme by the prime minister, three saplings — one fruit, one wood, and one medicinal — will be officially planted in every district and upazila.

Later, 20,325 saplings will be planted in each of 492 upazilas of the country at a convenient time in the current tree plantation season from July 16 to Sept 15 by maintaining the health codes in the wake of coronavirus outbreak, Shahab Uddin said.

“Following the footsteps of Father of the Nation Bangabandhu Sheikh Mujibur Rahman who first started tree plantation drive in the country, this programme is being implemented in the ‘Mujib Year’ to maintain the balance of environment,” the minister added.