Our Economic Diplomacy and Reality 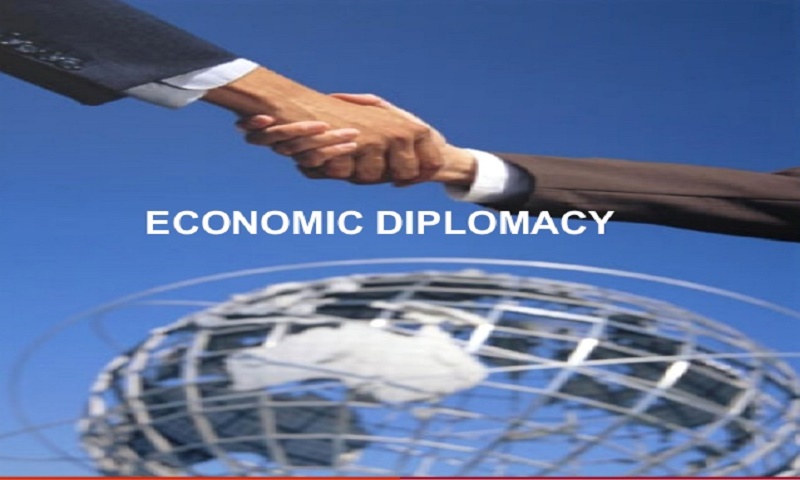 If we look back to the origin of diplomacy, we find that cross-border trade and commerce had played an important role in developing inter-nations relationship. Though, political aspect was given more emphasis at that time’s diplomatic engagements, but economic matters were there in hidden form. The economic diplomacy started getting its prominence with time once the rich countries and developing nations alike considered the mobilisation of foreign investment and export promotion.

Economic diplomacy has traditionally been defined as the decision-making, policy-making and advocating for a country’s business interests with other states. Here, both sending and receiving states, business leaders and government decision-makers work together for each other’s benefits in trade and other economic matters. Versatility including knowledge in international politics, flexibility with patriotism and commitment, sound judgement and strong business skills are all crucial in the execution of economic diplomacy.

Countries that like to bring good results from their economic diplomacy should not think that they are flowers and businesses are bees. Nothing in the world happens automatically. There is, at least, one reason to cause anything and the bigger the expectation, the thrust should be enormous. A country that likes to attract business must be proactive rather than passive. They must seek out opportunities and learn to bring them home.

We have our foreign policies and based on that our diplomatic activities, both bilateral and multilateral, are conducted by our professional diplomats as well as others considering the requirements of the situation. Though, the economic aspect was one of the components of our diplomatic activities since Bangladesh had established diplomatic ties with the world communities in the 1970s, but ‘economic diplomacy’ has emerged as a separate identity in our diplomatic services for last few decades.

We are working hard, day and night, to fulfil our dream in the field of economic diplomacy at home as well as abroad following government’s directives and policies. It is not true that we did not earn anything. Of course we have earned, but not as expected like some other countries. Why we are not getting expected outcomes from our existing performances? What are the problems we have been facing? How others are doing well? What are the ‘secret mantras’ behind their success? We need to find those answers and have the solutions. We must be aggressive, otherwise, let the matter go as usual.

In fact, our economic diplomacy is mainly concentrated on three sectors- (i) Foreign Direct Investment (FDI), (ii) Export of commodities including both material and technological products and (iii) Bangladeshi migrants working abroad. Therefore, the  present day ‘economic diplomacy’ is not practised only by the professional diplomats working in Bangladesh missions abroad, but also by the ministers, bureaucrats, business people, politicians, etc. at home. That means, the players in economic diplomacy are- (a) all government agencies that are involved in international economic mandates, (b) non-state actors, such as non-government organisations (NGOs) engaged in international economic activities and (c) businesspersons and investors. Nobody can deny that the weak infrastructure, burdensome bureaucracy, corruption, lack of transparency, insufficient diversification of exportable items, lack of co-ordination among the government offices and between public and private sectors, hidden struggle of supremacy among government offices at home and abroad, are the major hindrances to getting expected results from our economic diplomacy. We have the entire field and the players, but unless these issues are addressed, it will remain difficult to win the game.

I would like to share some of my ideas in view of the reality of economy diplomacy pursued by Bangladesh. Let’s start with Foreign Direct Investment (FDI) sector. Being a member of the diplomatic services, I had to share some unpleasant events with the foreign investors after their visit to Dhaka for investment purpose. Ultimately they had to abandon their investment plans in Bangladesh. Some of those intending investors also told us that our process for FDIs is very complex and time-consuming. Truly speaking, investors should not be harassed, but be encouraged. Trust of the investors is certainly crucial to attract FDIs. They would prefer to invest in a country having investment-friendly environment as well as comparatively better business. It seems that without restructuring of the existing system and arrangements of attracting FDIs, it would not be possible to get expected outcomes. It needs not only modernising, but also FDI-friendly and competitive.

The entire process of attracting FDIs might be done in two stages- (a) preliminary information, guidelines and necessary materials should be available at our missions abroad as well as from the website of the concerned government agencies and (b) formation of a central approval committee (consisting of members from concerned ministries and departments), that will meet as and when necessary to discuss on the applications (proposals) received from the interested foreign investors (through our missions or online) and give their decision (approved/rejected). Once an investor gets the approval, he will finish all other formalities (as he is already aware of those) within three to four weeks, subject to the size of the project. There will be an office (may be BOI) for secretarial services to be provided to that committee. Even, our authorities may think of introducing foreign investments through automatic approval route, except some sectors as defined by the government. This might be a better option for small/medium scale projects to attract foreign investors.

The export sector needs diversification of exportable commodities, which is very important to meet the present day world market. One or two or five exportable items can be exported to a number of countries, but may not be sufficient to fulfil the demands of maximum countries of the globe. It needs to make a list of the items of each country’s demand and then identify which products are or will be competitive for us. Accordingly, our industries can go for production of those products. New business opportunities and innovation, as we have seen in the past, can generate chances for success in this sector. We may like to explore further range of our products, particularly in technology, pharmaceuticals, agriculture, fisheries and services sectors.

About our migrant workers, I would like to say that we have no alternative, but to turn our workforce into a skilled workforce. This is necessary to make our migrant workers more acceptable to the recipient countries and for competitive benefits and facilities. The exploitation-free migration system, government monitoring about the role of the recruitment agencies, human trafficking are some of the issues still remain unaddressed. The ongoing corona pandemic has now added a new crisis for our migrant workers and we have to look into that.

Even, our experience in some other sectors, like disaster management (as international peace-keeping forces), may create some opportunities for us in other countries and thus be a part of our economic diplomacy. This initiative, if we like to take, might alike Brazilian Cooperation Agency (BCA) or Development Partners Administration (DPA) of India, both are accommodated in the Foreign Ministry as a part of economic diplomacy.

However, the most important issue for us is to establish the policies of economic diplomacy based on country’s strong economic fundamentals and then the methods of implementation of those policies. These policies might be reviewed as and when necessary in view of the world economic situation as well as our interest. In any way, the best policies and efforts are not enough unless we establish a bright image of Bangladesh among the world communities as the success of our economic diplomacy fully depends on that.

Our Foreign Ministry, while following its allocation of business, often fails to bring other organs of the government, who are parts of our economic diplomacy, under one umbrella. It is happening in Dhaka as well as in our missions abroad, though each of these organs has the same objectives. It is not understood why the country will suffer for a certain ministry’s or individual’s behaviour, misunderstanding or egoism. We may have a look on other countries like India, Vietnam, Cambodia, China, etc and study their working plans and coordination system in this regard. If we fail to bring discipline and the best coordinated environment in our work-place, whatever the policies and efforts are there, it will present the country a very poor outcome.

Economic diplomacy might have a big space to play in the post-COVID economic world. Inter-state relationships might change a lot with the changing behaviour of the world people as well as the economic pattern of almost all countries. Bangladesh is not an exception to that. Therefore, we should carefully observe and understand the overall world situation, both political and economic, including our own country and start stepping our feet to get the thing move towards the right direction. Being living in a very high competitive environment, we have to shape ourselves to fit in the hole. Otherwise, we will remain as a left-out or we have to be satisfied with a peanut not more than that.

The complementariness of economic interests which arises from the collaboration between countries or regions, as well as efficiently overcoming the differences caused by the differing ways in which countries perceive their economic priorities, will contribute to the development of stronger social, economic and political relationships in the world, and in this process the role of diplomacy is irreplaceable. As we are waiting for a corona-free world, a world with new dimension and equation, a world of new hopes and aspirations, a world with new economic opportunities; we have to finish our preparation well ahead so that we are able to march with others in that journey.