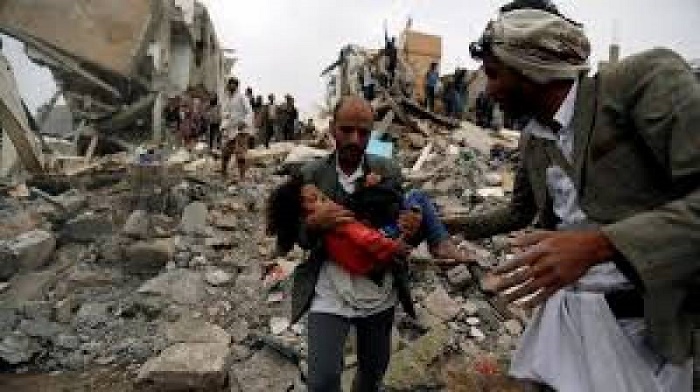 At least a dozen people, including five children, were killed on Wednesday in an air strike in Yemen’s northern Al-Jawf province, government and medical sources told AFP.

“At least 12 people, including four women and five children, were accidentally killed in the city of Al-Hazm,” about 100 kilometres (60 miles) northeast of the capital Sanaa, a government source told AFP.

Yemen has been embroiled in a civil war since 2014 that pits the government — backed by a Saudi-led military coalition that provides air support — against Iran-backed Huthi rebels, who control much of the north, including the capital.

The government source added that the strike landed in a residential area about three kilometres from a battlefront between the Huthis and pro-government forces.

Medical sources confirmed that at least 12 people were killed, among them women and children.

Rebels blamed the deaths on the Saudi-led coalition, which has not yet commented on the incident.

The strike came days after the United Nations Office for the Coordination of Humanitarian Affairs (OCHA) said seven children and two women had been killed in an air raid on Sunday in the northwest governorate of Hajjah.

Another two women and two children were wounded in the strike, according to OCHA.

UN experts have accused both sides in Yemen’s five-year-old conflict of war crimes.

The Norwegian Refugee Council said in a statement on Wednesday that “bombings by the Saudi-led coalition have reached an intensity not seen in two years and missiles fired by (the Huthis) into Saudi Arabia have also increased”.

It urged the UN to act and called for an “immediate independent investigation”.

On Monday, the Saudi-led coalition acknowledged the possibility of civilian casualties during an anti-Huthi operation in Hajjah and said it was being investigated.

It also said its forces had “intercepted and destroyed seven drones and four ballistic missiles” launched by the Huthis against civilians in Saudi Arabia.

Yemen’s war escalated in March 2015 when the coalition intervened against the rebels. Tens of thousands have been killed since then in what the UN has described as the world worst humanitarian crisis.