New Bangladesh envoy presents credentials to King of the Netherlands 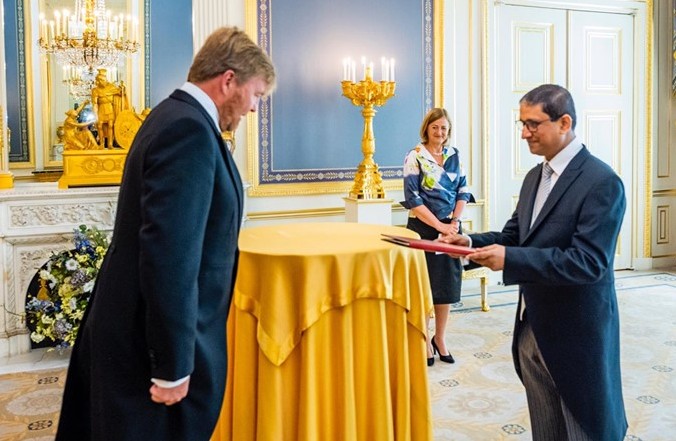 The newly appointed Bangladesh Ambassador to the Netherlands, M Riaz Hamidullah, presented his credentials to King Willem-Alexander in the Royal Palace in The Hague on Wednesday morning.

At the ceremony, King Willem-Alexander and Ambassador Hamidullah discussed key issues of bilateral interest and engagements.

The King said that both the deltaic nations share “unique commonalties in issues and also approach to global challenge like climate change, water, women, blue economy, sustainable manufacturing, circular economy,’’ according to a message received from the Bangkadesh Embassy in the Hague on Thursday morning.

Ambassador Hamidullah thanked the Dutch government for appreciation of Bangladesh’s challenges as well as accomplishments and result-oriented cooperation since Bangladesh’s independence.

He particularly acknowledged the role and support of the Dutch government is mobilizing the Dutch RMG Brands to remain engaged in Bangladesh during the COVID crisis.

He apprised the King of the existing and emerging investment opportunities in Bangladesh for Dutch entrepreneurs across Agriculture, IT, Blue Economy, 4IR technologies, water in mutually beneficial terms.

Bangladesh and the Netherlands has around US$ 1.5 billion bilateral trade out of which Bangladesh exports 1.2 Billion Dollars to Netherlands. Cumulative Dutch investment in Bangladesh stands at over US$ 1 billion.

The Secretary General (Foreign Secretary) of the Dutch Foreign Ministry and the Grand Master of the Royal Court joined the King at the courtesy call by Ambassador Hamidullah following presentation of the Credentials.