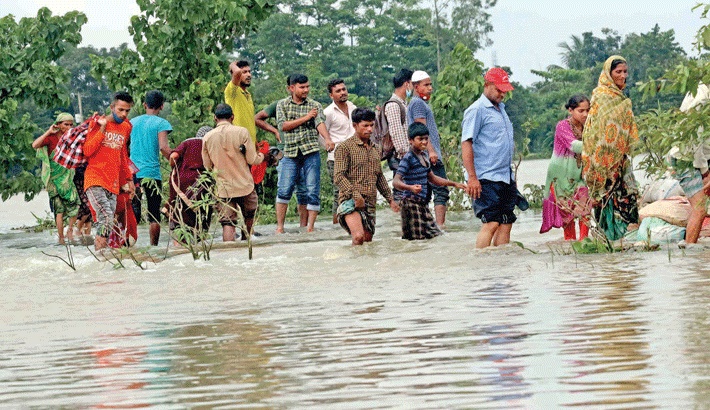 Millions of flood-affected people are facing acute crises of food and drinking water in different parts of the country as the overall flood situation turned for the worse on Wednesday.

The continuous swelling of major rivers caused flooding in new areas and river erosion has taken a serious turn in many places. Floodwaters have damaged many houses, crops, communications infrastructures, educational institutions and other establishments.

A large number of trees and crops on a vast tract of land were washed away by floodwaters and strong current.

The marooned people have taken shelter on embankments, roads, highlands and flood centres with their domestic animals and valuables as their houses have been washed away and crops damaged.

People who have been marooned by the flood are passing days with extreme miseries due to the shortages of food and pure drinking water.

It is feared that diarrhoea and other waterborne disease may break out in the food-hit areas. The flood-affected people are suffering much due to lack of adequate relief.

More than 1.46 million people of 459 unions under 91 upazilas of 17 districts have been affected by the devastating floods, the NDRCC said.

So far, at least 38 people have died from drowning, snake bites and diarrhoea, according to the Director General of Health Services (DGHS).

Because of heavy rainfall and upstream water from bordering areas, the water flow of Brahmaputra-Jamuna and Ganges-Padma river basins has increased rapidly on the day and it will continue in the next 48 hours, said Md Arifuzzaman Bhuiyan of the FFWC.

Thirteen major rivers were flowing above the danger level while the water levels at 56 river stations across the country marked a rise on Wednesday, according to the FFWC.

Flood victims are passing days in great distress due to the shortages of food and pure drinking water. The government’s relief materials were insufficient, locals alleged.