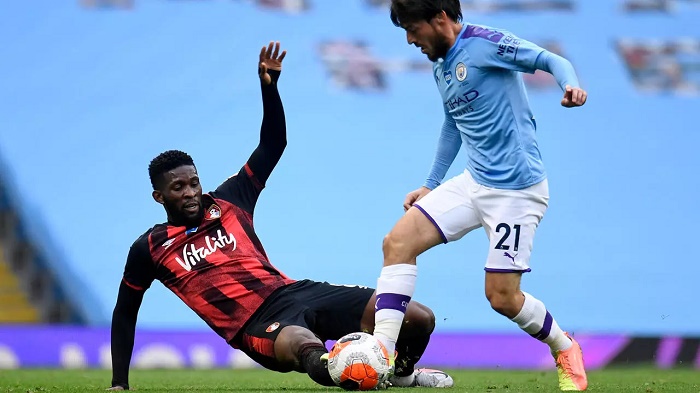 Pep Guardiola insisted there is no chance of persuading David silva to stay at Manchester City after the Spanish midfielder inspired a 2-1 win that pushed Bournemouth closer to relegation on Wednesday.

Silva opened the scoring with a superb free-kick and set up Gabriel Jesus's solo effort at the Etihad Stadium to leave Bournemouth three points from safety despite David Brooks' late goal.

Silva will leave at the end of the season and City boss Guardiola recently suggested the 34-year-old deserves a statue to recognise his remarkable 10 years with City.

Asked if there was a way he could keep the playmaker, Guardiola said: "He has decided to leave, he has said many times. I think he wants to finish after 10 seasons here.

"He's been in incredible top form since we came back from the lockdown.

"He played another exceptional game and scored again, two times in a row a fantastic goal.

"Hopefully he comes back for a farewell game that he more than deserves and he can find a place for the last years of his career."

A ninth successive away defeat means Bournemouth go into their final matches against Southampton and Everton likely needing two wins to have a chance of extending their five-year stay in the top flight.

With West Ham and Watford -- the teams directly above Bournemouth -- meeting on Friday, the Cherries are not down yet, but they are in severe danger of slipping into the Championship.

"It is not about performance at this stage of the season because we want results but I can't fault the lads," Bournemouth boss Eddie Howe said.

"We played at the right times and mixed it up well. I'm just absolutely devastated to come away with nothing after putting so much into the game."

City's mood is far more upbeat after the Court of Arbitration for Sport backed their appeal against UEFA's two-season Champions League ban on Monday.

Already assured of second place in the Premier League, City's priorities are Saturday's FA Cup semi-final against Arsenal and their Champions League last 16, second-leg clash with Real Madrid next month.

Having lost the Premier League title to Liverpool, City seem determined to add more trophies to the League Cup they won earlier this season.

They have won their last three games, scoring 12 goals in the process.

Raheem Sterling and Kevin De Bruyne were on the bench as Guardiola made six changes, but the imperious Silva endured they were not missed.

Silva bagged a fine free-kick against Newcastle in City's last home game and he took just six minutes to produce another sumptuous set-piece at Bournemouth's expense.

Fouled by Jefferson Lerma, Silva dusted himself down, took aim from the right-hand side of the penalty area and curled his free-kick past Aaron Ramsdale's despairing dive into the roof of the net.

After a bright start, City lost a little rhythm and Bournemouth's Josh King was given room for a shot that drifted wide.

City keeper Ederson was called on to make a superb save as he pushed Junior Stanislas's free-kick onto the post.

Ederson came to the rescue again to deny Dan Gosling before Dominic Solanke's effort from the rebound was blocked by Otamendi.

Despite their wobble, City's ability to conjure a moment of magic remains unparallelled and they doubled their lead through Jesus's sublime effort in the 39th minute.

This time Silva was the provider with a deft pass to Jesus, who glided past a gaggle of Bournemouth defenders, nutmegged Jack Stacey and fired into the far corner.

Jesus's third goal in his last three games took him to 21 this season in all competitions, a well-timed spree with Sergio Aguero sidelined after knee surgery.

Bournemouth were given hope by Brooks when the former City academy graduate tapped in from Callum Wilson's cross in the 88th minute, but it was too late to salvage a point.