Rise of Shahed as a notorious fraudster 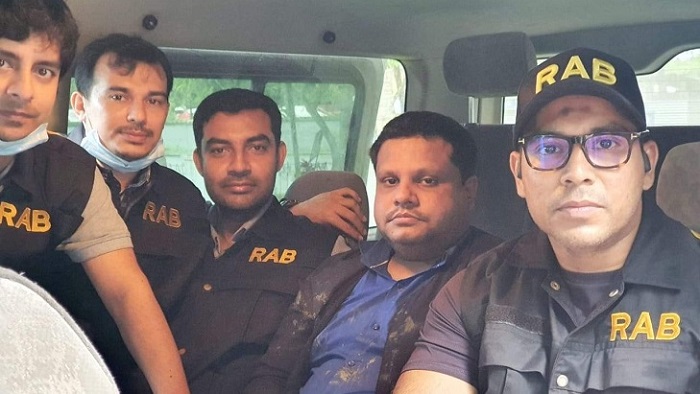 The rise of Regent Group chairman Shahed Karim from nothing to a wealthy businessman within a decade through countless forgeries, crimes and deceptions has stunned everyone.

He is now known as the king of illegal business, introducing himself as a major, colonel, high official of the Prime Minister’s Office and member of the international affairs sub-committee of the ruling Awami League.

After completing his school education in 1998, he came to Dhaka from Satkhira from where he was arrested on Wednesday over a number of complaints, including fooling people in the name of coronavirus testing.

People, close to Shahed, said he was arrested on charges of fraudulence after the AL came to power in 2009. Grown-up in an ordinary family, Shahed served two years in jail.

Coming out from jail, the fraudster returned to his old habit and allegedly duped people through Multi-Level Marketing business in Dhanmondi.

He made over Tk 5,000 million through his MLM network called BDS Click1.

With the money, he established many entities, including Regent Hospital, Regent College and Regent University at Uttara under the Regent Group.

All the incidents of cheating, allegations of murder, dodging of tax and money laundering came to light after a team of the Rapid Action Battalion (RAB) found fake COVID-19 test reports at his Regent Hospital in Uttara in the capital on July 6.

Law enforcement agencies said all his businesses were being operated illegally.

Shahed, known as a bluff master, used to operate his business using his relations with influential quarters, including ministers and top policymakers.

According to the NID details, his mother died much earlier than the actual date of her demise which was on November 6, 2010.

He had weaselled his way into the circle of society’s power brokers without much of a struggle and became become a sound businessman within a short time through forgery and shady businesses.

But his real face alongside the crimes and forgeries came into fore after RAB found fake COVID-19 test reports at his Regent Hospital.

RAB found that the hospital forged more than 6,000 COVID-19 certificates and embezzled over Tk 30 million in the name of providing COVID-19 test services and treatment.

RAB also seized from there many fake COVID-19 certificates, many unauthorised rapid testing kits and an unregistered jeep.

Once a close aide to BNP leaders, Shahed stepped into the politics of the Awami League to gain personal interest.

He is also a holder of an accreditation card issued by the PID as editor of ‘Daily Natun Kagoj’.

His network of ‘friends’, encompassing senior leaders of the Awami League and big shots in the BNP, is now coming to light.

Some journalists, too, are now under fire for patronising Shahed, a regular face on TV talk-shows.

On September 27, 2016, a letter from the Home Ministry accused Shahed of being a fraudster for falsely identifying himself as an army officer and called for action from police headquarters.

The letter, sent to the IGP of police, read, “Shahed committed various misdeeds at different times by introducing himself as major/lieutenant colonel, a former cadet college student.

The ministry also asked the IGP to take action against him, but he somehow managed to get away with it.

Md Saifullah Masud, a proprietor of Masud Enterprise in Karwan Bazar, filed the two cases against Shahed with a Dhaka court on charges of embezzling Tk 3.68 crore from the businessman through taking construction materials.

Shahed is facing around 59 cases including two in Dhanmondi, one in Barishal, two with Dhaka court, eight in Uttara and one in Chattogram for various charges.