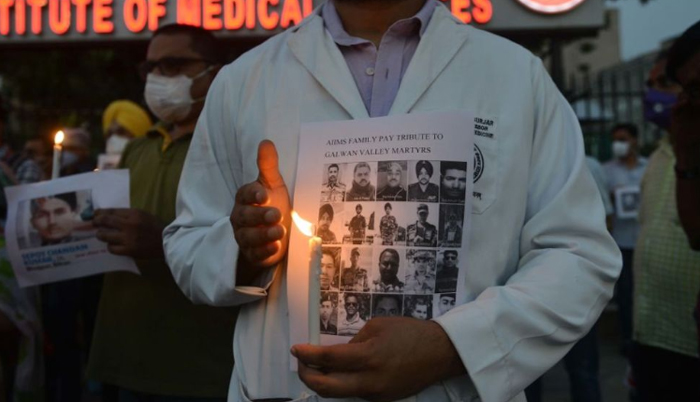 The Chinese government is pressuring the families of soldiers who died in a violent border clash with India in June not to conduct burials and in-person funeral ceremonies in an attempt to cover up an episode that Beijing appears to consider a blunder, according to a US intelligence assessment.

The Chinese Ministry of Civil Affairs has told families of those who died in the Galwan Valley clash that they must forgo traditional burial ceremonies and cremate the soldiers' remains and that any funeral services should be conducted remotely, not in person, a source familiar with the assessment tells US News.

Though the government has used the threat posed by the spread of the coronavirus as a pretext, the assessment concludes that the new rules are a part of a deliberate effort by Beijing to undermine public awareness and erase any enduring reminders of the violent clash.

The incident late in the day on June 15 – which each claims the other initiated – followed months of troop movements by both sides in the strategically consequential mountain region of northern India and southwest China. Outrage continues among the population in India at the offensive, which many analysts believe will force New Delhi to shift its careful balance in foreign relations toward closer alignment with the US and its allies.

China reportedly fears that images of gravestones for its fallen soldiers of the People's Liberation Army, or PLA, could further stoke those sentiments if spread on Chinese or international social media.

"The reality is they don't want to create martyr soldiers," says the source, speaking on the condition of anonymity to discuss sensitive material. "So they have banned functions where friends and families can pay their respects for the PLA deceased."

China has encouraged the practice of cremations and no ceremonies during the pandemic for public health reasons. The intelligence assessment indicates those concerns are separate from Beijing's interest in downplaying the soldiers' deaths.

The Chinese Embassy in Washington, DC, did not immediately respond to requests for comment.

China has previously exploited deadly incidents to build strong nationalistic support at home, such as the 2001 collision between a Chinese fighter jet and a US spy plane near the southern Hainan Island or the accidental US bombing in 1999 of the Chinese Embassy in Belgrade.

However, the deadly clash in mid-June, in which soldiers from both sides engaged in brutal hand-to-hand combat in contested territory within the Himalayas, has largely disappeared from Chinese media and official statements. Many analysts see that silence, along with reports of the new burial rules, as an indication that Beijing did not intend for the June encounter to escalate as it did and remains concerned about the implications.

"If the Chinese really want to use this to forge national unity, then we would see this all over Chinese media," says Bonnie Glaser, director of the China Power Project at the Center for Strategic and International Studies. "The Chinese are being very careful about what is reported. They would like to avoid major damage to their relationship with India. And if this becomes something that is very prominent in the Chinese media, it could take on a life of its own."

The latest revelations about burials are consistent with China's ongoing policy of controlling reporting nationally about events along its border, Glaser says.

China still has not confirmed how many of its soldiers died as a result of the clash, though US News previously reported that American intelligence believes 35 perished, along with at least 20 among the Indian military.

A spokesman for the Chinese Ministry of Foreign Affairs referenced the region where the clash took place briefly on Friday, saying only that both sides have taken "effective measures to disengage" from the contested Galwan Valley after a meeting between commanders from both sides. It remains unclear whether either China or India has indeed withdrawn troops and personnel from the strategically critical but largely inhospitable region where both have bolstered civil infrastructure such as roads.

The Chinese government's latest concerns extend to the Chinese festival of Tomb Sweeping Day next April, when families visit the graves of their ancestors and loved ones to pay respect, according to the assessment. The annual holiday, known locally as the Qingming Festival, falls shortly before the Chinese Communist Party celebrates the 100th anniversary of its establishment in July.