China vows to retaliate against Trump's decision over Hong Kong 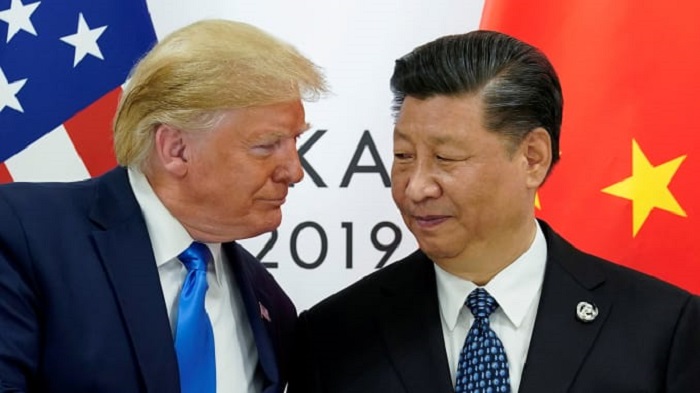 China has vowed to retaliate after the US ended Hong Kong's preferential trade status and imposed sanctions on officials who crack down on rights.

President Donald Trump said he was acting because China had taken away Hong Kong's freedom after it imposed a new security law.

Beijing condemned Trump's decision, saying it would impose sanctions on relevant people and entities in the US.

US-China ties have become increasingly strained over a wide range of issues.

Apart from Beijing's actions in Hong Kong, Trump has criticised China over its handling of the coronavirus pandemic as well as its military build-up in the South China Sea, its treatment of Muslim minorities and massive trade surpluses.

Trump's decision means the end of Hong Kong's special trade status with the US, agreed in 1984 when the territory was still a British colony. Hong Kong is expected to be treated the same as mainland China, meaning its goods could be subjected to additional tariffs.

The controversial security law - which effectively outlaws criticism of China's government - is the most sweeping change to the political landscape of Hong Kong since the UK handed back sovereignty to Beijing in 1997.

Trump also said he had signed the Hong Kong Autonomy Act, which passed unanimously in Congress earlier this month and penalises banks doing business with Chinese officials who implement the security law.

In a strongly worded statement, China's foreign ministry described the decision as a "gross interference" in its domestic affairs and said the country would impose retaliatory sanctions to "safeguard China's legitimate interests".

"The US attempt to obstruct the implementation of the national security law for Hong Kong will never succeed," the statement said.

"We urge the US side to correct its mistakes, refrain from implementing the act and stop interfering in China's internal affairs in any way. China will firmly respond if the US goes ahead."

Speaking in the Rose Garden on Tuesday, Trump said the executive order was intended to "hold China accountable for its aggressive actions against the people" of Hong Kong.

"No special privileges [for Hong Kong], no special economic treatment and no export of sensitive technologies," said the president, who first announced in May that his administration would begin paring back the territory's special status.

According to a document released by the White House, any dealings in US property by anyone determined to be responsible for or complicit in "actions or policies that undermine democratic processes or institutions in Hong Kong" would be blocked.

After being questioned by a journalist, the president said he had no plans to speak to Chinese President Xi Jinping.

Trump also said his administration held China "fully responsible for concealing the [coronavirus] and unleashing it upon the world". His own response to the pandemic has been under scrutiny, as the US has 3.4 million recorded cases, the highest in the world, and more than 136,000 deaths.

The president's policy address digressed into a lengthy political attack on his Democratic presidential challenger, Joe Biden, ranging from trade and immigration to policing and climate change.