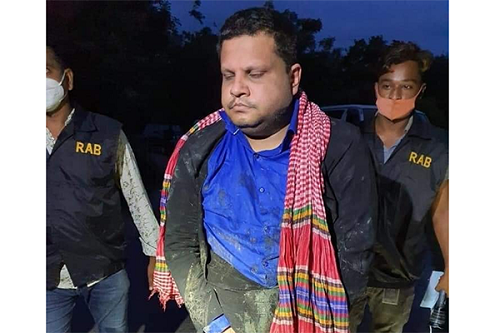 Regent Group Chairman Md Shahed, the prime accused in a case filed with Uttara West Police Station over the forgery of Covid-19 tests, has been taken to Dertective Branch (DB) office.

Sahed was handed over to the DB of Dhaka Metropolitan Police (DMP) after holding a press conference at the RAB headquarters in the afternoon today (Wednesday).

“The case filed by RAB against 17 people of Regent Group, including its chairman Md Sahed, is being investigated by DB of DMP. So, Sahed will be handed over to DB,” said the RAB DG.

Meanwhile, Sahed was arrested from the border area of Debhata upazila in Satkhira on early Wednesday (today).

Rapid Action Battalion arrested Shahed with illegal arms in a special drive from the bank of Labangaboti River in Komarpur village around 5:00am, according to Lt Col Ashique Billah, director of RAB's legal and media wing.