He made big deal to flee to India via river He cut his beard, coloured his white hair black, wore burqa 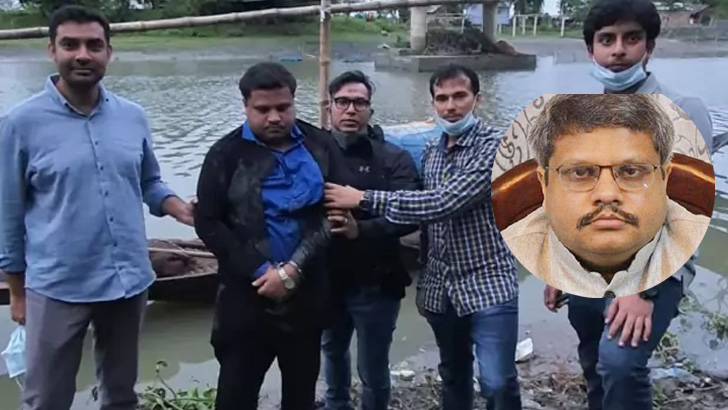 “Shahed was arrested from the Labangabati riverbank at Komarpur village of Debhata upazila of Satkhira around 5:00am,” said Lt Col Ashique Billah, director of the Legal and Media Wing at the RAB headquarters.

“Shahed was caught red-handed while he was trying to cross the border by boat. He wore a burqa while fleeing the country,” the RAB director said.

An illegal firearm with some bullets was also seized from his possession, he added.

Shahed made a contract with Satkhira District Council Member Al Ferdous Alfa to facilitate his escape to India in exchange for Tk 5 million, sources said.

The elite force finally found out the whereabouts of Shahed nine days after carrying out a massive drive across the country.

RAB Intelligence Wing Chief Lt Col Sarwar-Bin-Quasem, who led the drive, said it would have been very difficult to arrest Shahed if he could cross the border.

“Shahed wanted to flee to India via the Ichamati river. He got onto a boat after wearing a burqa. He cut his beard. He coloured his white hair black,” he added.

Nurul Islam, an inhabitant of Komarpur village, said: “After Fazr prayers, we saw a convoy of RAB members crossing the bridge over the Labangabati river.”

“Later, we saw that the RAB team arrested Shahed from the riverbank. At one stage, an angry mob started to beat Shahed, but they (RAB) rescued him,” he added.

Shahed was on the run after a case was filed against him on July 7for issuing fake Covid-19 test reports in his Regent Hospital.

Later, Shahed was airlifted to Dhaka from Satkhira Stadium at 8:00am by helicopter. The helicopter carrying Shahed landed at Tejgaon old airport in the capital at 9:00am.

Briefing reporters at Tejgaon helipad, RAB Additional Director General (ADG) Colonel Tofael Mostafa Sarwar said the RAB had been searching for Shahed for the last nine days as he frequently changed his locations.

On secret information, a team of the RAB intelligence wing with the help of local RAB-6 members nabbed Shahed while he was trying to flee to a neighbouring country, he said.

RAB members suspected that Bachhu, a human trafficker in Satkhira, was helping Shahed cross the border, the RAB ADG said.

“After we brought Shahed to Dhaka, we came to know that he has a private office in Uttara of the capital,” Lt Col Ashique Billah said.

“Since this is a private office, a very few people have access. He (Shahed) didn’t allow anyone to enter the office except a handful of people,” he further added.

Afterwards, the elite force entered the flat in Sector 11 in Uttara along with Shahed at 12:26pm. RAB members seized fake notes of Tk 1.46 lakh from the flat, Lt Col Ashique added.

During a press briefing at the RAB headquarters, RAB Director General Chowdhury Abdullah Al-Mamun said, “Shahed fled Dhaka several times to avoid arrest. He moved from place to place by his own car, public transport and even by truck. He was finally arrested from Satkhira while crossing the border by boat.”

He further said Shahed tried to flee to India with the help of local brokers, said the RAB DG.

He also said, “The case filed against 17 persons, including Shahed, on charges of fraud, is being investigated by the DMP's Detective Branch.”

Later, Shahed was handed over to the Detective Branch. He will be produced before a Dhaka court today to seek 10 days’ remand.

According to an RAB intelligence report, Regent Hospital collected samples from at least 10,000 people. Some 6,000 of them got fake Covid-19 test reports.

On July 7, the RAB sealed off Regent Hospital's head office in the capital, and two of the hospital's branches in Uttara and Mirpur, on charges of issuing fake Covid-19 certificates and other misdeeds.

The crime-busting force filed a case against 17 persons, including Regent Group Chairman Shahed, for their alleged involvement in issuing fake Covid-19 certificates and other misdeeds.

On July 9, Bangladesh Bank (BB) instructed all the banks to freeze Shahed’s bank accounts for the next 30 days.

Police also imposed a travel ban on Shahed in the interest of proper investigation into the case. Police sent a letter to the Immigration Department in this regard on July 9.

RAB members seized the passports of Shahed and his father on July 11. In a drive at Uttara Branch of Regent Hospital and the Regent Group head office, they also collected some important evidence, including a computer hard disk.

RAB Executive Magistrate Sarwar Alam was present in the investigation team. He opened the sealed office.

A total of 59 cases have been filed against Shahed on charges of cheating and forgery, sources said.

Besides, a case was filed against Shahed on July 14 on a charge of embezzling more than Tk 91 lakh from a transport exporter in Chattogram.