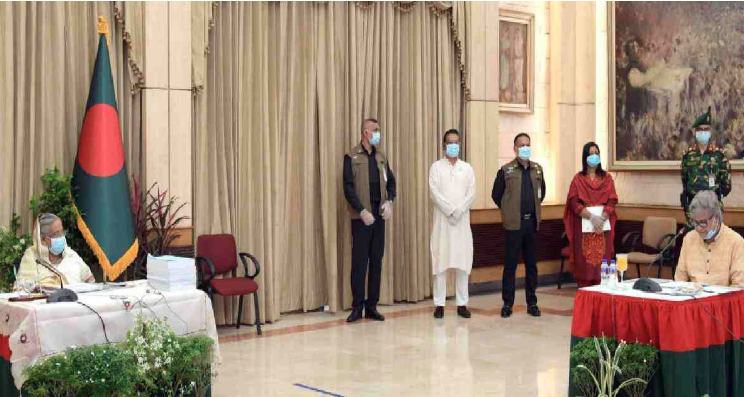 The Executive Committee of the National Economic Council (ECNEC) on Tuesday approved eight projects with an outlay of Tk 10,102 crore, including Tk 3,020 crore for agricultural mechanisation aiming to reduce agricultural production costs in the country.

The approval came from the 2nd ECNEC meeting of the current fiscal year, held with ECNEC Chairperson and Prime Minister Sheikh Hasina in the chair.

The Prime Minister and Planning Minister MA Mannan joined the meeting from Ganobhaban through a videoconference, while other Ecnec members were connected from NEC Bhaban.

“Today (Tuesday), we placed eight projects of five ministries at the meeting and all the projects got approval. The total cost of the projects is Tk 10,102.03 crore... Tk 10,068.90 crore will be borne from the government’s fund, while the remaining Tk 33.13 crore from the funds of the organisations concerned,” said the minister at a virtual press briefing after the ECNEC meeting.

Talking about the agricultural mechanisation project, the Planning Minister said the government will provide agricultural machinery to farmers at 70 percent and 50 percent subsidised prices in haor and coastal areas respectively.

He said the Department of Agricultural Extension will implement the project by December 2025.

While endorsing the project, the Prime Minister directed the authorities concerned to examine the quality of the locally produced agricultural machines saying that the government will promote local ones if these are of good quality, Mannan said.

The major objectives of the project include preventing 10-15 percent of crop from wastage, and saving time and money in cultivation by enhancing the supply and use of modern agricultural machines; reducing agricultural production costs and boosting productivity and thus alleviating poverty.

ECNEC also approved another project titled Increasing Production of Oil-Bearing Crops Project involving Tk 278.26 crore under the Agriculture Ministry aiming to meet the local demand of edible oil and reduce the import costs in this regard.