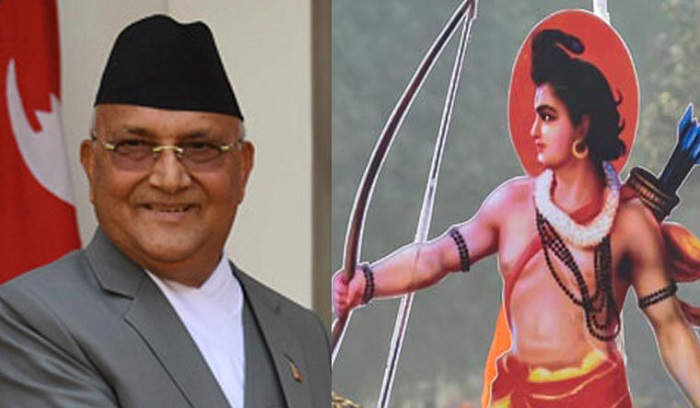 Stoking a potential controversy, embattled Nepali Prime Minister KP Sharma Oli on Monday claimed that the "real" Ayodhya lies in Nepal, not in India and that Lord Ram was born in Thori in southern Nepal.

Condemning Oli for his remarks, India’s ruling BJP national spokesperson Bizay Sonkar Shastri said that the Left parties even in India played with people's faith, and the Communists in Nepal will be rejected by the masses in the same way they have been here.

"Lord Ram is a matter of faith for us, and people will not allow anybody, be it the prime minister of Nepal or anyone, to play with this," he said in New Delhi.

Speaking at an event on the birth anniversary of Nepalese poet Bhanubhakta at the Prime Minister's residence in Kathmandu, Oli said that Nepal "has become a victim of cultural encroachment and its history has been manipulated."

Bhanubhakta was born in 1814 in Tanhu of western Nepal and is credited for translating Valmiki's Ramayan into Nepali language. He died in 1868.

"Although the real Ayodhya lies at Thori in the west of Birgunj, India has claimed the Indian site as the birthplace of Lord Ram,” Oli said.

“We also believe that deity Sita got married to Prince Ram of India. Actually, Ayodhya is a village lying west of Birgunj,” he said, adding that the marriage between bride and bridegroom at such a distance was not possible at the time when there was no communication and transportation system.

"The place called Thori, near Birgunj is the real Ayodhya, where Lord Ram was born. In India there is great dispute on Ayodhya. But, there is no dispute in our Ayodhya," Prime Minister Oli was quoted as saying by his press advisor Surya Thapa.

“Valmiki Ashram is also in Nepal and the holy place where King Dasharath had executed the rites to get the son is in Ridi, which is in Nepal,” he said.

As Dasharath was the ruler of Nepal, it is natural that his son Ram was also born in Nepal, Oli argued. Therefore, real Ayodhya lies in Nepal, he claimed.

Many scientific inventions and knowledge originated in Nepal, but unfortunately such a rich tradition could not continue later, Oli said.

Prime Minister Oli, under growing pressure to resign amidst a rift in the ruling Nepal Communist Party over his style of functioning, has alleged that some of the ruling party leaders are aligning with the southern neighbour to remove him from power after his government issued a new political map incorporating three Indian territories of Lipulekh, Kalapani and Limpiyadhura.

His allegations have been criticised by senior NCP leaders, including former prime minister 'Prachanda', who demanded Prime Minister Oli's resignation, saying his recent anti-India remarks were "neither politically correct nor diplomatically appropriate."

The India-Nepal bilateral ties came under strain after Defence Minister Rajnath Singh inaugurated a 80-km-long strategically crucial road connecting the Lipulekh pass with Dharchula in Uttarakhand on May 8.

Nepal reacted sharply to the inauguration of the road claiming that it passed through Nepalese territory. India rejected the claim asserting that the road lies completely within its territory.

India termed as "untenable" the "artificial enlargement" of the territorial claims by Nepal. India has handed over a diplomatic note to Nepal over the map issue, Nepalese media reports said.