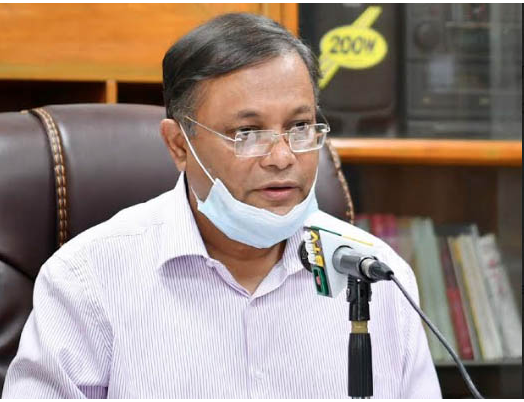 Information Minister Dr Hasan Mahmud on Monday said the government has taken steps against JKG Health Care and Regent Hospital authorities before any allegation is raised against them by unearthing corruption and irregularities of the health facilities in conducting coronavirus tests and treatment.

“The government unearthed the irregularities of JKG and Shahed before raising any allegation against them and publishing reports in the media as well,” he told reporters while exchanging views at the seminar room of his ministry at secretariat here.

The information minister said chief executive officer and chairman of JKG were arrested and two hospitals of Shahed were sealed while cases were filed against the offenders. The law enforcers firmly said that they would be able to arrest Shahed, he added.

Hasan said, BNP leaders and many others are now issuing statements on these matters, but the government unearthed the corruptions before that. “I, personally, think that the Directorate General of Health Services should have been more cautious before engaging these health facilities in handling coronavirus patients and providing treatment to them as well,” he remarked.

He said the government has started taking different steps to provide protection to the people from the very beginning of Coronavirus outbreak in the world. All formalities of the Mujib Year and all programmes of the Independence Day were cancelled after detecting first Coronavirus patient in the country, said Hasan, also Awami League joint general secretary.

Dwelling on different initiatives of the government in tackling the coronavirus pandemic and maintaining livelihoods of the people as well, he said Prime Minister Sheikh Hasina is trying relentlessly to salvage the economy by combating the crisis.

Hasan said, the death rate in Bangladesh is low than other countries including India and Pakistan due to continuous efforts of the government. He went on saying that the government is taking actions against corrupts in the health sector as it (government) is geared to handle the situation effectively.

Criticising a comment of a BNP leader on the flood situation, Hasan said, “I’m apprehensive that BNP leader Mirza Fakhrul Islam Alamgie might go to the extent of saying ‘the flood has occurred in the country due to lack of government’s initiatives’. You all know that a cyclone hit the country some days ago during the prevailing Coronavirus situation. And the government tackled it successfully and protected the lives and properties.”

He said BNP is shedding crocodile tears over the flood situation, but they are not extending helping hands to the needy.

The Department of Films and Publications is investigating the matter if Shahed published the newspaper or not, he said, adding actions would be taken if any irregularity is found out to this end.

The information minister hoped that the registration will be given soon on the basis of reports of government’s concerned organizations.