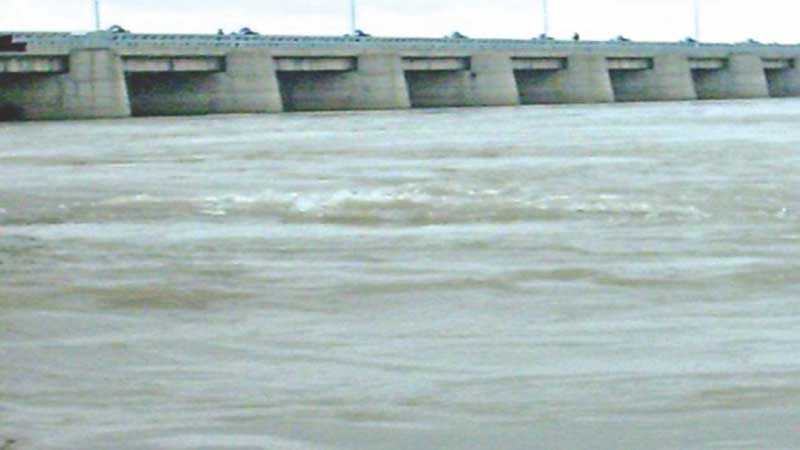 Due to onrush of water from upstream and incessant rainfall, water of Teesta River is now flowing 52 centimetres above the danger level at Teesta Barrage point in Hatibandha upazila, while it was 64 cm above in Dharla River at Shimulbari point of Lalmonirhat Sadar upazila on Monday morning.

Water Development Board (WDB) issued red alert around the Teesta Barrage in Dowani area at Hatibandha upazila of Lalmonirhat at 9:30pm on Sunday as the waters continued to rise beyond the danger level.

The continuous swelling of major rivers amid heavy rainfall deteriorated the flood situation in the country.

More areas in the northern, northeastern and southern districts, including Nilphamari, Jamalpur, Kurigram, Lalmonirhat, Sylhet, Sunamganj, Natore and Sathkhira, have been inundated further due to the overflow of major rivers.

Because of heavy rainfall and upstream water from bordering areas, the water flow of three river basins — Brahmaputra-Jamuna, Ganges-Padma and Upper Meghna -- have increased rapidly and it will continue in the next 72 hours, said FFWC Executive Engineer Md Arifuzzaman Bhuiyan.

Ten major rivers were following above the danger level while the water levels at 76 river stations across the country marked a rise on Sunday, the FFWC said.

Many people marooned in the floods have taken shelter on embankments, roads, highlands and flood centres with their domestic animals and valuables as their houses have been washed away and crops have been damaged.

They are suffering much for acute shortages of food and pure drinking water. They are in need of relief.

The recorded rainfalls during the past 24 hours till 9:00am on Sunday were 266cm at Cherrapunji, 244mm Shiliguri, 162mm in Coch Bihar, 128mm at Koilashar, 50mm at Shillong, 145mm in Jalpaiguri and 53mm in Gangtok points of the Indian states, the FFWC said.

The rainfalls was 150 mm in Sunamganj, 148mm at Lalakhal, 121mm in Thakurgaon, 108mm in Kamalganj, 104mm at Manurailway bridge, 98mm in Moulvibazar, 95mm in Sylhet and 92mm at Lorergarh during the period, it also said.

Cherrapunji to dump more 500-1000mm rainfall within the next 5 days that will worsen the flooding across north and northeastern regions of Bangladesh.

Executive Engineer of the Teesta Barrage Project (TBP) division of BWDB Rabiul Islam said flood situation alongside the Teesta was likely to deteriorate in the next 24 hours as the onrush of upstream water continues.

Executive Engineer Ariful Islam of BWDB for Kurigram and Lalmonirhat divisions said water levels of the Dharla and Brahmaputra are continuing to rise, inundating fresh low-lying areas and the trend might continue during the next 24 hours in these districts.

“Light-to-moderate rain or thundershowers accompanied by temporary gusty wind is likely to occur at most places over Mymensingh, Rangpur, Barisal, Chattogram and Sylhet divisions and at many places over Dhaka, Khulna and Rajshahi divisions with moderately heavy-to-very heavy falls at places over the country,” it forecasted.