1,000 young girls were trafficked to Dubai in the last eight years: CID 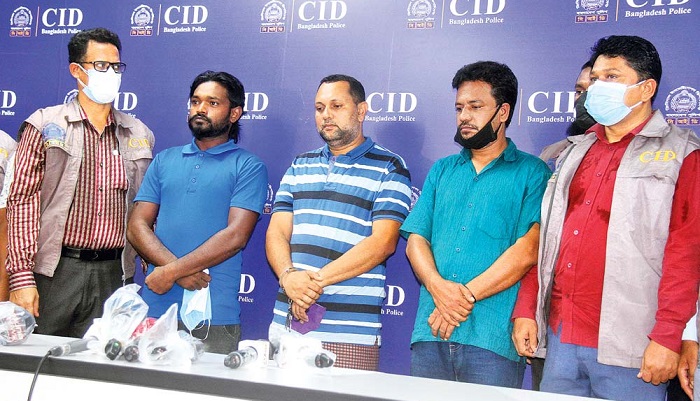 Criminal Investigation Department (CID) has arrested the ‘godfather’ of international women trafficking gang Azam Khan with his two cohorts from the capital.

DIG Imtiaz Ahmed, chief of Organised Crime unit of CID, briefed this to a group of journalists at CID headquarters Sunday noon.

But the date, time and exact places of their arrests were not disclosed.

The senior police officer said the gang led by Azam had trafficked about 1,000 young and beautiful girls to Dubai in the last eight years.

They were trafficked there in the name of giving them good jobs in Azam’s own four hotels—Fortune Pearls Hotel and Dance, Hotel Royal Fortune, Hotel Fortune Grand and Hotel City Tower.

Through his 50 local brokers, Azam allured the victims of a handsome salary amounting to Tk50,000 monthly. The girls were even paid one month salary in advance.

“After taking the girls in the hotels, they were forced to commit immoral acts. Azam and his cohorts inflicted inhumane torture on them who did not comply with their demand,” said the police officer.

The CID has obtained many voice records of tortures committed in Dubai, the officer told the journalists.

After knowing about Azam’s illegal activities, the Dubai government seized his passport and arrested him and later sent him back to Bangladesh.

“After returning to Bangladesh, he went into hiding and tried to flee to a neighbouring country through border areas,” the officer said.

But his efforts went up in smoke as the CID came to know about his whereabouts and nabbed him.

During primary interrogation, Azam confessed to his involvement in trafficking of 1, 000 girls.

Azam is wanted in 15 cases, including six murders, with various police stations in the country.

On July 2, the CID filed another case against him with Lalbagh Police Station of the capital.

Azam hails from Fatikchhari in Chattogram. In 1996, he went to Dubai.