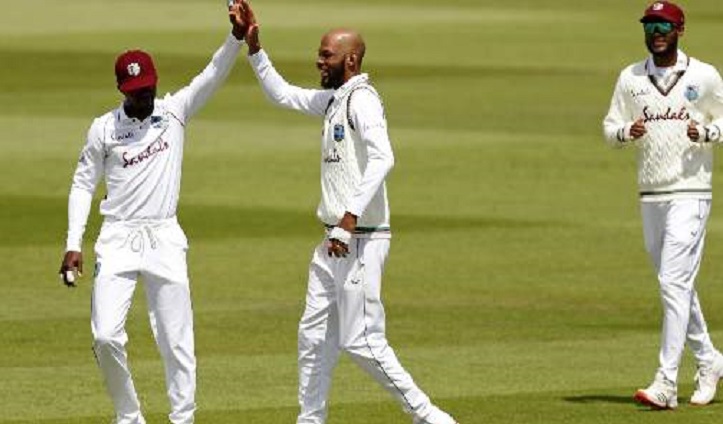 Roston Chase succeeded where West Indies' fast bowlers had failed by removing England opener Rory Burns on the fourth day of the first Test at Southampton on Saturday.

At lunch, England were 79-1 in their second innings, still 35 runs adrift of West Indies' first innings 318.

It seemed England would get through the morning session without losing a wicket.

But shortly before the interval, Burns gave his wicket away on 42 when he failed to get over a cut from part-time off-spinner Chase and was caught at at backward point by John Campbell to end a stand of 72.

Joe Denly, needing a big score to bolster a low Test average for a batsman of under 30, was unbeaten on one.

England resumed on 15-0 after Burns and Sibley had survived 10 testing overs late on Friday.

But in ideal sunny batting conditions on a placid pitch, the pair got through Saturday's opening spells from the Windies' quicks without much trouble.

Burns cover-drove Shannon Gabriel for Saturday's first boundary and followed that up by straight-driving Kemar Roach for another four.

West Indies were without a frontline spinner after omitting Rahkeem Cornwall.

But they could call upon Chase.

Although primarily a batsman, Chase took a Test-best 8-60 when West Indies beat England at his Barbados home ground last year en route to a 2-1 series win.

But having made a valuable 47 in West Indies' first innings of this match, he posed few problems until removing Burns in his 10th over.

Meanwhile the towering Holder struck Sibley, then on 24, a sharp blow on the right elbow with a delivery that rose alarmingly from a good length.

West Indies had dominated the first three days of a match that marks international cricket's return from lockdown.

They dismissed England for 204, with Holder taking a Test-best 6-42.

Stand-in England skipper Ben Stokes, captaining the side in the absence of Joe Root, led the hosts' attack with 4-49.

Stokes, second to the number one-ranked Holder in the ICC's Test all-rounder rankings, had earlier top-scored with 43 in England's first innings after winning the toss.