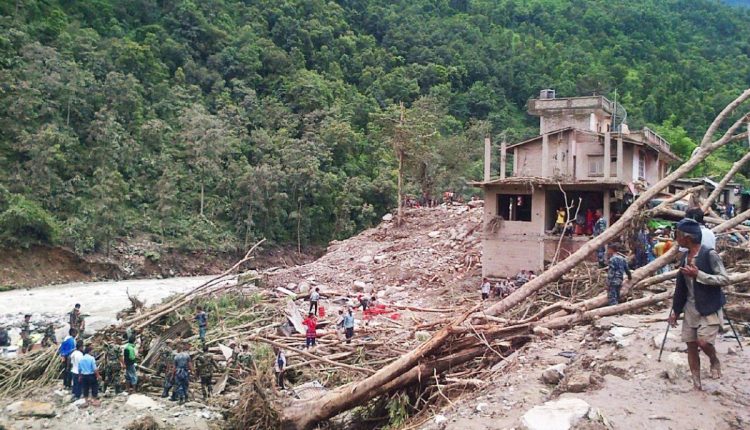 The death toll from flash floods and landslides in Nepal rose to 23, while 35 others were missing as torrential monsoon rains continued to lash the country, a government official said Saturday, report agencies.

Nine people were killed and more than 30 were missing in Myagdi district, 200 km (125 miles) northwest of the capital Kathmandu, where several houses were destroyed on Friday, district administrator Gyan Nath Dhakal said.

The country’s Meteorological Office on Thursday warned of heavy rainfall over the weekend, with warnings that dozens of rivers and rivulets would inundate cities and towns across the country.

Janardan Gautam, a spokesman for Nepal Disaster Risk Reduction and Management Authority, said two people went missing on Saturday in the district of Sindhupalchok and Jajarkot after being swept away by swollen rivers.

Landslides have affected nine out of 77 districts and have blocked several highways across the country, Gautam said.

In a televised address to the nation on Friday, Prime Minister KP Sharma Oli said the government had mobilized security forces to rescue the people affected by the landslides.

Hundreds of people die in the natural disaster-prone Nepal every summer, when monsoon rains trigger landslides and flooding.

Last year, over 100 people were killed in landslides and floods across the country, according to the disaster management authority.