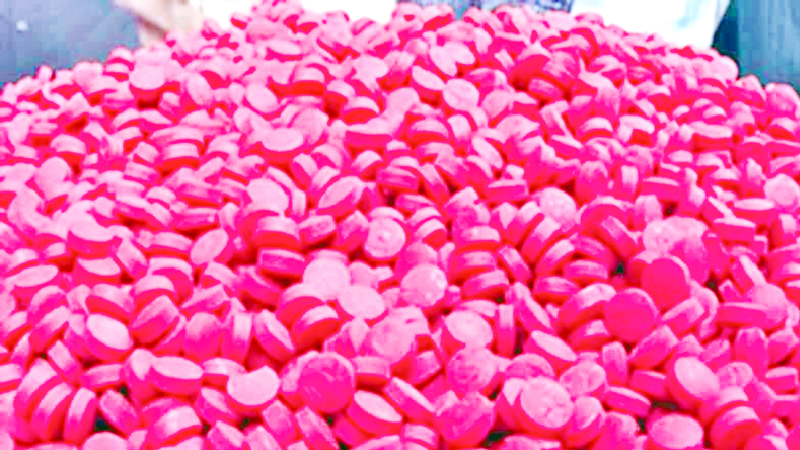 Amid the coronavirus outbreak,  trading of deadly drug Yaba continues unabated across the country.

With the Eid ul-Azha festival drawing nearer, organised gangs of such yaba smugglers have become more active in the capital and elsewhere in the country, detective sources said.

Despite drastic action including killings of branded drug dealers in crossfire by law enforcers,  Yaba trade has not stopped in the country at all.

Evading the eyes of law enforcers, a huge consignment of Yaba tablets are being smuggled into the country through different points of Teknaf upazila in Cox’s Bazaar from the neighbouring Myanmar.

The dead were listed Yaba smugglers and they had been doing illegal drug trade for long, the BGB officer added.

Nine suspected Yaba traders were killed in gunfights during this period, said a press release of BGB-34.

Over 100 yaba smugglers have been killed in ‘shootouts’ with law enforcers and internal conflicts in Cox’s Bazar since the start of anti-narcotics crackdown by law-enforcement agencies on May 2018. Besides, over 400 other drug traders were also killed in cross fires in other parts of the country during the same period.

The surrender of 102 drug lords on February 16 now seems to be merely an eyewash as the yaba empire in Teknaf remains mostly intact, with some of their family members and paid agents taking care of the illegal trade.

A new strategy of yaba smuggling, involving fresh routes and hundi traders, has been at work since the surrender of 102 godfathers and dealers in Cox's Bazar in February.

Home Minister Asaduzzaman Khan has recently asked private helicopter operators “to be more cautious” after receiving information that choppers were being used for smuggling yaba pills.

Millions of yaba pills worth billions are being seized during anti-drug operations in the Cox’s bazaar and other parts of the country.

Deaths of suspected drug dealers killed in so-called shootouts with law enforcers including police and RAB continue to be reported from across Bangladesh since Prime Minister Sheikh Hasina ordered the anti-drug operation in May 2018.

But their activities proved difficult to restrain. Smuggling of such deadly yaba into the country from neighbouring Myanmar is yet to stop.

It has been alleged that the law enforcers just play the role of on-lookers instead of taking action against the drug traders. At times, the lawmen, just conduct customary operations against the drug dealers, but most of the time the arrested drug dealers are released in exchange for money, it is alleged.

Taking advantage of weaknesses displayed by police and border guard during patrolling, organised drug smugglers have build up a strong network in border areas including Ukhea in Teknaf.

Assistant Inspector General (AIG) of Police headquarters Sohel Rana said a number of drug traders are being caught with various drug items from different parts of the country often.

They are also being awarded various terms of imprisonment on charges of carrying drug. But soon, they get released from the jail on bail and return to the same profession again, he added.