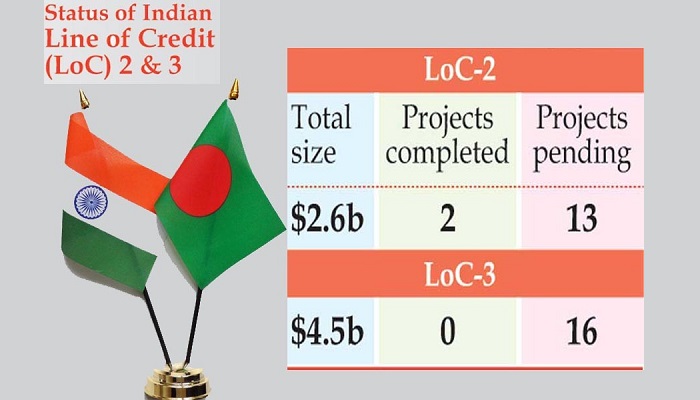 Projects under Indian credit lines got momentum from the last two fiscal years after bureaucratic tangles and most project problems were addressed through a series of bilateral meetings.

“Implementation of Indian Line of Credit (LoC) projects got a boost in the last two fiscal years, which has a reflection in increased fund disbursement in FY’19 and FY’20,” an Economic Relations Division (ERD) official said, seeking anonymity.

In contrast to snail’s pace in project implementation as well as fund disbursement, LoC projects saw $100 million fund release in 2018-19 fiscal year, which rose further to over $130 million in the just-concluded 2019-20 fiscal year.

The 46 projects picked up under three LoCs totaling $7.36 billion got stuck for years mainly because of bureaucratic red tape, land acquisition problem and changes in design and consultants, according to ERD officials.

“The projects are likely to see more acceleration when 2nd and 3rd LoC projects are on board,” the ERD official also hoped.

The third LoC’s $1.7 million was actually released for the first LoC as New Delhi has allowed Dhaka to utilize $200 million from its $4.5bn third credit line for first LoC, ERD officials said.

Dhaka and New Delhi signed a loan deal for $1 billion first LoC in August 2010. The loan amount stood at $862 million after India declared $200m out of $1 billion credit line as grants and pumped another $62 million into it.

Out of 15 first LoC projects, 12 have so far been complete while three railway projects, including Khulna-Mongla rail line, have been limping for a decade.

They now expect that the rail line connecting the country’s second largest port in Mongla may come into operation by mid of the next year.

But rehabilitation of Kulaura-Shahbajpur section will need an upward revision in work rates for the contractor, ERD officials said, adding that the contractor is reluctant to complete the project because of old work rates.

Only two projects out of 15 under the second LoC have been completed. Those are procurement of trucks and procurement of double-deck and single-deck AC and non-AC buses for state-run BRTC.

ERD officials said out of the remaining 13 projects, 12 are at procurement stage while development project proforma (DPP) for ‘Development of Infrastructure in Bangabandhu Sheikh Mujib Shilpa Nagar’ project is yet to be ready.

The Bangabandhu industrial park scheme has replaced the ‘Establishment of Dhaka IT Special Economic Zone Construction’ in Keraniganj and Mirsarai’ project.

Of them, Rooppur nuclear power plant’s power evacuation line project advanced the most as a contract package of it has already been signed, according to ERD officials.

A total of four projects of third LoC have been approved by the Indian authorities while the rest are at DPP stage, they added.