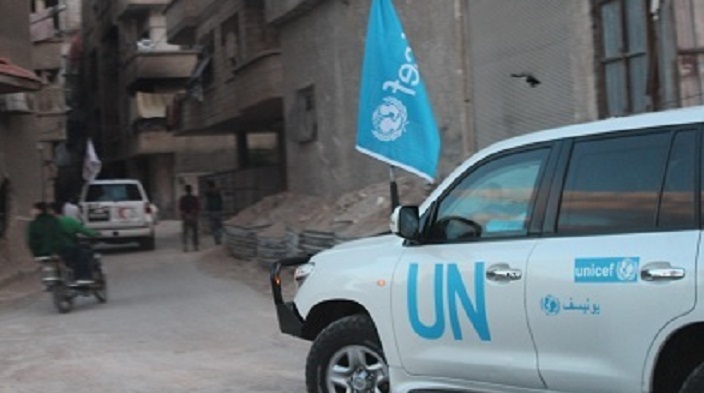 The UN will announce midday Friday the results of a vote on a resolution to prolong cross-border humanitarian aid to war-torn Syria, the authorization for which expires later in the day.

It is unclear whether Russia, which vetoed a previous draft, would once more block the vital assistance.

However Moscow seemed to indicate it would exercise its veto, proposing a new counter-resolution overnight that limits authorization for humanitarian aid and could be put to a vote should the proposed resolution fail.

Germany and Belgium, two non-permanent Council members that are responsible for the humanitarian aspect of the UN's Syria dossier, presented the draft that was put to vote Thursday.

Stopping cross-border aid would be "a devastating blow to the millions of Syrian families who rely on this aid for clean water, food, health care and shelter," warned the NGO Oxfam.

Russia and China on Tuesday vetoed a draft resolution by Germany and Belgium providing for a one-year extension of the cross-border authorization.

It would have allowed for the maintenance of two crossing points on the Turkish border -- at Bab al-Salam, which leads to the Aleppo region, and Bab al-Hawa, which serves the Idlib region.

The UN authorization allows the body to distribute aid to displaced Syrians without needing permission from Damascus.

Russia and China argue that the UN authorization violates Syria's sovereignty, and that aid can increasingly be channeled through Syrian authorities.

In January, Moscow, Syria's closest ally, succeeded in having the crossing points reduced from four to two and in limiting the authorization to six months instead of a year, as had been done previously.

Russia, which claims to want continued aid for the insurgent Idlib region, submitted a counter-proposal to the UN Security Council Wednesday to keep only the Bab al-Hawa access point open for six months.

Moscow claims that more than 85 percent of current aid goes through Bab al-Hawa and that the Bab al-Salam entry point can therefore be closed.

But the bid failed when put to vote. Russia needed nine votes and no veto from a permanent member of the Council to get its resolution passed -- but received only three votes in addition to its own.

In the only concession to Moscow, the new draft asks for just a six-month extension of cross-border aid authorization, instead of one year. But Germany and Belgium still want both border crossings kept open.

For Washington's ambassador to the UN, Kelly Craft, it is necessary to "reach the maximum amount of Syrians that are in need of humanitarian aid."

When asked if the issue was a red line during an interview Wednesday with AFP, she replied, "Yes, absolutely."

According to Craft, keeping only one border crossing open would cut off 1.3 million people living north of Aleppo from humanitarian aid.

One diplomat, who spoke on condition of anonymity, described the episode as a "showdown" that could drag on.

Another noted that "if the authorization is renewed a few days late, it is not the absolute end of the world. It suspends the convoys for a few days, it does not put them in danger."

For the UN, keeping as many entry points open as possible is crucial, particularly given the risk of the coronavirus pandemic, which is spreading in the region.

In a report in June, UN Secretary-General Antonio Guterres called for a one-year extension of the aid to include the two current access points.

When asked Thursday if the UN would be satisfied with a single entry point into Syria, body spokesman Stephane Dujarric said: "We need more aid to go through the border. We do not need less to go through."