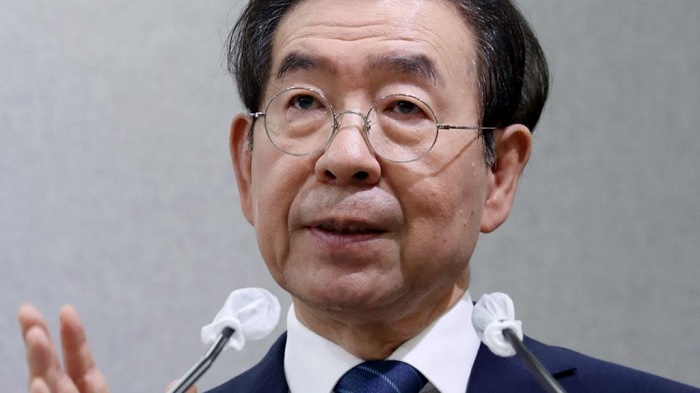 Police in the South Korean capital Seoul have found the body of the city's mayor after he went missing on Thursday.

Park Won-soon's daughter reportedly told police he had left a message before leaving the house, leading her to raise the alarm.

His body was found at Mount Bugak in northern Seoul, near where his phone signal was last detected.

No cause of death has yet been declared.

However, police said they were investigating the case as a suicide, according to the Yonhap news agency.

A note was later released that appeared to be written by Mr Park. It said: "I'm sorry to everyone. I thank everyone who has been with me in my life."

It has emerged that a female employee had filed a sexual harassment claim against Mr Park in the hours before he went missing, but there has been no confirmation that this played a role.

He did not show up for work on Thursday, cancelling a meeting with a presidential official at his Seoul City Hall office, Kim Ji-hyeong, an official from the Seoul Metropolitan Government, told the Associated Press.

Police officer Lee Byeong-seok told reporters that Park was seen by a security camera at 10:53 near the entrance to the wooded area where the phone signal was last detected.

About 600 police and fire officers using drones and dogs searched the area for hours on Thursday.

Crowds gathered outside the Seoul National University hospital late on Thursday amid unconfirmed reports that Mr Park had been found and taken there.

Mr Park was elected mayor of Seoul in 2011 and elected to his third and final term in June of last year.

As a member of President Moon Jae-in's liberal Democratic Party, Mr Park was reportedly under consideration as a potential presidential hopeful in the 2022 elections.

With his re-election last year, Mr Park became the first mayor of the city to begin a third term. He had carried his history as a civic activist and human rights lawyer into his tenure as mayor, and was an outspoken critic of social inequality and corruption in South Korea.

As a lawyer, he was credited with securing the country's first sexual harassment conviction.

He clashed with President Park Geun-hye, openly supporting millions of people who protested against her in 2017 before she was eventually charged and imprisoned on bribery and other charges.