Why are we 'milking' crabs for a coronavirus vaccine? 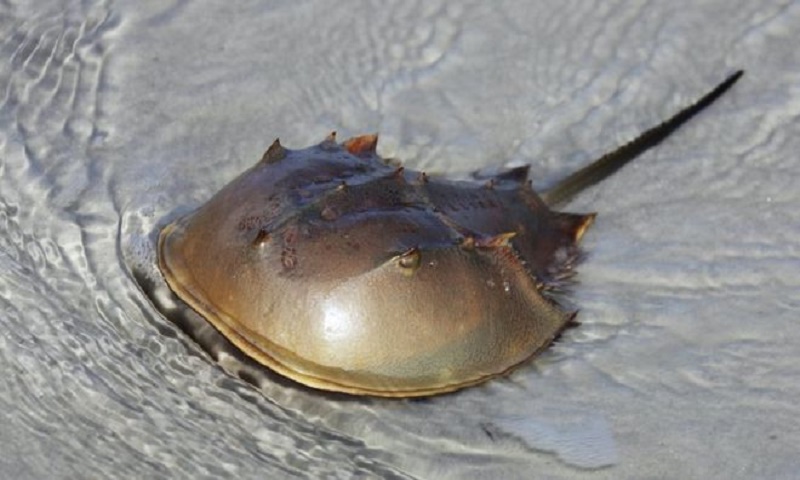 They've got 10 eyes, have existed for more than 300 million years - and we use their pale blue blood to keep us all safe.

No, it's not science fiction, just plain old science. We're talking about the horseshoe crab.

For decades we've needed them, and their blood, to help us discover human medicines.

They're being used today to help scientists research a potential coronavirus vaccine.

But there are questions about how many are still around, how the process affects the animals and some campaigners want this "milking" of horseshoe crabs stopped.

How do they help?

These "living fossils" matter because their blood helps make sure there are no dangerous bacteria in newly created drugs - the sort of bacteria that can kill people even in tiny amounts.

An extract in the crab's blood cells chemically reacts to harmful stuff and scientists use it to test if new medicines are safe.

And horseshoe crab blood is the only thing humans can find, anywhere on earth, that does this.

Each year hundreds of thousands are caught and taken to labs in America, where some of their blood's removed from a vein near their heart.

Then they're released back into the wild.

'No one really knows the impact it has'

But in recent years, it's been estimated that anything up to 30% die from it.

Oher studies suggest female crabs that go through it are less likely to mate afterwards.

All of that, say wildlife campaigners, causes problems.

"Right now, they bleed about half a million crabs," says Dr Barbara Brummer, who's in charge of a team working on conserving nature for the state of New Jersey - where a lot in America are caught.

She told BBC Radio 4's Today programme that "no-one really knows the impact the withdrawal of blood has on the life of that crab" when they're put back alive.

American horseshoe crabs are now close to officially being seen as an endangered species.

But some of the big companies who make drugs point to stats that suggest numbers have stayed roughly the same for a few years now.

'We can move away from this natural source'

A lot of research has been done into creating a man-made substance that could replace the blood.

Scientists came up with an alternative which was given the okay to be used in Europe. Some drug companies in the US joined in as well.

So why are we talking about this now?

Because last month, the organisation that decides on what makes drugs safe in America said it can't prove the alternative works well enough.

Any companies wanting to sell medicines in the States have been told they need to keep using crab blood for testing.

That means anyone who might come up with a coronavirus vaccine will need to check it out it the old way - if they want to be able to get it to millions of Americans.

Dr Barbara says she's pushing for them to take another look - since the other option's being used elsewhere.

"It's so we can move away from relying on this natural source," she says.

Some drugs companies say they can meet the demand for a Covid-19 vaccine without having to take blood from many more crabs than normal.

But Dr Brummer says there are "at least 30 companies working on a vaccine" and "every one of them has to go through this testing.

"So my concern is about the population of the horseshoe crabs - because they're such a key part of the eco system."