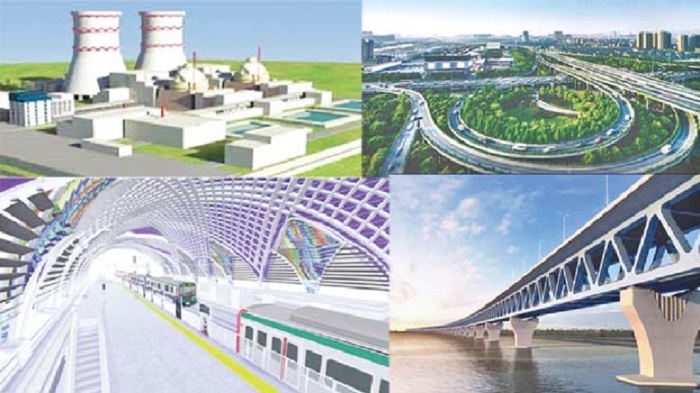 The government priority schemes went through a bumpy ride in the just-concluded fiscal year thanks to the Corona crisis coupled with some existing key problems.

Except for the construction of Padma bridge, progress of most other fast-track projects was not “satisfactory” in FY’20, according to the latest progress report on the mega projects.

Besides, more than two months work loss due to Covid-19, other key problems delaying the progress include complexity in signing deal on foreign loan and land acquisition.

The progress report suggests that most of the mega schemes could not spend even half of the allocated money until May in FY’20, creating an uncertainty for these mega projects in meeting their present deadlines.

The government made an aggregate allocation of Tk308.55 billion against the top six out of nine mega schemes, but only Tk17.59 or 56.52 percent could be spent in 11 months of FY’20.

Of these schemes, only Matarbari coal power plant project could spend the whole allocated money until May while Dohazari-Ramu-Gundum rail line project spent 80 percent money and the rest four could not spend half of their allocation.

The top six fast-track projects saw a cumulative financial progress of 34.62 percent until May after their launch with Tk895.16 billion total expenditure, it also revealed.

ADP allocation for the project was Tk40.15 billion for FY’20, but the yearly expenditure in 11 months was Tk28.71 billion, the progress report of Economic Relations Division (ERD) showed.

Another most prioritised Dhaka mass rapid transit or metrorail project could spend Tk23.35 billion out of Tk43.27 billion yearly allocations until May.

Its total project spending stood at Tk99.30 billion out of Tk219.85 billion estimated cost. So far, its overall progress stood at 44.67 percent. Work of metrorail project was severely disrupted amid corona crisis.

The country’s lone nuclear power plant project is being implemented at Rooppur, Pabna at the highest cost of Tk1,130.93 billion.

The government also made the highest allocation of Tk148.46 billion against the scheme in FY’20 to advance it further, but Tk78.73 billion could be spent up to May.

Its cumulated financial progress was found to be 25.04 percent with Tk283.26 billion total expenditure.

This Japan assisted power plant’s progress was very impressive in the last fiscal year as it managed to spend Tk32.01 billion in 11 months out of Tk32.25 allocation in FY’20’s revised ADP.

Cumulative expenditure of the scheme so far stood at Tk118.99 billion or 33.32 percent of estimated cost and its physical progress was 29.75 percent.

The important Padma rail link project is another priority of the government. It is being implemented at a cost of Tk392.47 billion, which is even higher than that of Padma bridge.

But its execution was very poor in FY’20 as only Tk2.98 billion yearly allocation was spent against Tk32.97 billion ADP allocation.

The key rail line project designed to develop tourism and regional connectivity could spend Tk9.09 billion out of Tk11.35 billion allocation until May this year.

In 10 years, its financial progress stood at 26.65 percent with Tk48.07 billion total expenditure while its physical progress was found at 39 percent.